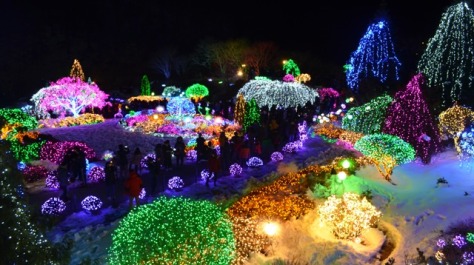 What’s a public garden in a cold climate supposed to do in the winter? Sure, you can stay open all year around, but for the most part, the beautiful flowers people like to see at gardens are hibernating for the winter. Of course gardens can also close, and some of them do, until spring when new flowers bloom. Or gardens can take the step that the Morning Calm Arboretum in Korea does and host a lighting festival. Sure the garden is open during the day and you can walk around the gardens and take in the snow-covered views. But the real action starts when the sun sets, and the garden comes alive with all the lights. Shrubs and trees are covered in all shades of colored lights imaginable. 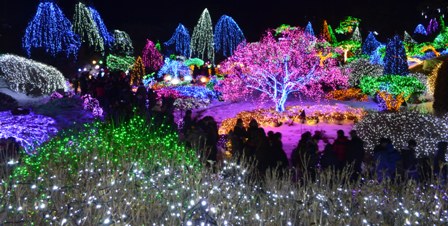 All of a sudden, you are transported into a fantasy world, albeit a crowded fantasy world filled with many, many people jockeying for position to take the best photos. While beautiful, this is definitely not the place to come if you want peaceful solitude, where you can just sit back and take in the view. Or I should say, you can’t really contemplate the view from any viewpoint that attracts a lot of people. Everyone is impatient for their turn to take pictures ( I know I was), so you take the pictures you can, take in the view from the viewpoints for a couple minutes and then just walk around and enjoy the lights and block out the people (if that is your thing like it is mine). When I was focused on just seeing the lights and not worried about taking pictures, time just sort of slowed down and it was more about enjoying the moment and experience for what it was.  The Sunken Garden is the main attraction, where most of the lights are located. But there are also three other lighted areas: the Hometown Garden, the Bonsai Garden, and the Road to Heaven pathway.

The Morning Calm Arboretum Lighting Festival takes place every year from approximately early December to early March. During the lighting festival weekends, the garden is open until 2100. The earliest sun will set is around 1730 near winter solstice and gets progressively later as time goes on. When I was there this past Saturday, sun set around 1815 and the lights came on right around that time. 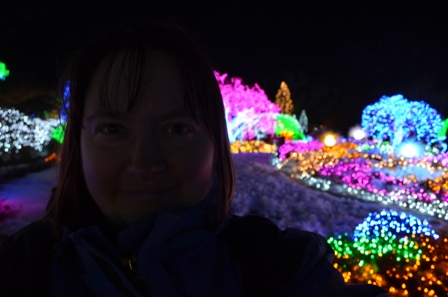 Getting to the Morning Calm Arboretum is a bit time consuming, but still pretty straightforward. Since I don’t want to drive in Korea, I elected to take public transportation. I took the Metro and a bus all the way there. In Seoul, take a train to Sangbong station, which is a stop on the Metro Line#7 or the Jugang Line. Transfer to the Gyunchen Line subway headed toward Chuncheon. An alternate means is to take an ITX train from Yongsan, Cheongnyangi, or Sangbong (among other stations) headed toward Chuncheon. The ITX train is undoubtedly quicker, and just slightly more expensive. It however doesn’t run quite as frequently as the Metro. Either way, you will exit the train at the Cheongpyeong Station. From there, go around the back of the train station to catch a bus. There is a shuttle bus that runs from Gapyeong Terminal to the Morning Calm Arboretum on regular intervals throughout the day. The shuttle bus will stop at key tourist sites, such as Nami Island, Petit France and Morning Calm Arboretum. An all day bus ticket with cost 5,000 won per person. The ride from Cheongpyeong Station to Morning Calm Arboretum is approximately 30 minutes. Ticket prices for the Lighting Festival is 8,000 won per adult. A note if you take the shuttle bus there. The last bus is scheduled to leave from the arboretum at 2000, and keep in mind there will be a line of people headed back to the train station.  So keep that in mind if you want to sit down for the 30 minute ride back to the train station. Taxis will also be available, though there is also a  line for them as well. Travel time from central Seoul to Cheongpyeong Station is approximately two hours each way.

More information for the Morning Calm Arboretum can be found at their website: http://morningcalm.co.kr/

The website is in both English and Korean. The Morning Calm Arboretum is open year round, the views change throughout the year thanks to the changing seasons.