From a decoration standpoint, Christmas is one of my favorite times of the year. I adore the gorgeous lights that adorn the cities. It makes everything so beautiful. I had time to enjoy holiday decorations in Seoul before I went to New Zealand for the actual holidays. One evening was spent touring the downtown area and got quite an eyeful. Many parts of the city, particularly major department stores, had a wide variety of holiday decorations and illuminations, plus there were the Christmas street stores at local markets, like Namdaemun. 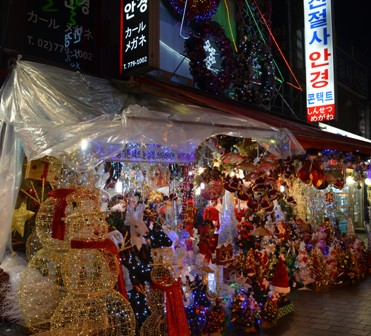 The department stores were bright with exterior illumination and both real and fake trees were lit up.

The nearby Hilton Hotel also had plenty of beautiful interior decorations of trees and one of the biggest holiday train sets I’ve seen. 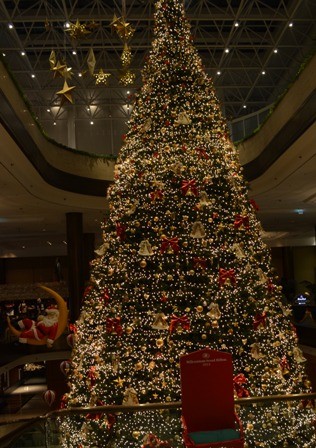 I got to New Zealand a little over a week before Christmas. While I was out on the hiking trail for actual Christmas day, the decorations were still up for everyone to enjoy later in the month.

The storefront decorations at the Christchurch department store, Ballantynes, were particularly interesting. It was like a cross between Candyland and Willy Wonka’s Chocolate factory. They were kind of odd in a pleasing way. It was nice to see decorations that were sort of fantasical, with a hint of creepy, instead of gooey sweet decorations.

I spent New Year’s Eve in Christchurch. I had hoped to do it in Queenstown, because I heard their NYE celebrations were insane (though some of that insanity was mitigated by the ban on alcohol in public places), but my vacation schedule didn’t really work out that way. I arrived back in Christchurch from Arthur’s Pass in the early evening and enjoyed my final meal of 2013 at a local Korean restaurant (though the Korean food seemed a bit New Zealandized).

If you want to have a crazy New Years celebration, Christchurch isn’t the best place to do it. The public celebration in Hanley Park was specifically designated alcohol free, and there was a city-wide liquor ban on walking around with booze outside. So I hung out in my hostel room enjoying my bottle of sparkling wine until shortly before midnight. I didn’t really care to sit in a park listening to bands I didn’t know. But I was interested in the fireworks display (fireworks pretty!), so I showed up shortly before midnight. Fireworks went off, people scattered and I went back to my hostel. It was very sedate NYE, and once again, it was a NYE on my own in a foreign country.