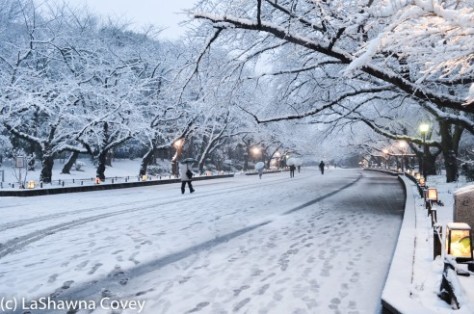 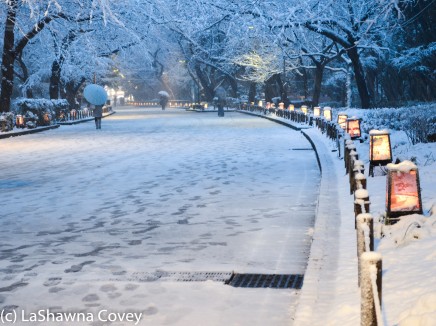 It snowed the first day of my weekend. The snow was flurrying when I first landed that morning, and as the day progressed and turned into night, the snowfall thickened. I was glad I had an umbrella with me to shield me from the snow falling upon me, but it was beautiful to watch the snow fall. I spent the late afternoon and early evening in Ueno Park, which is a very large urban park in the middle of Tokyo. 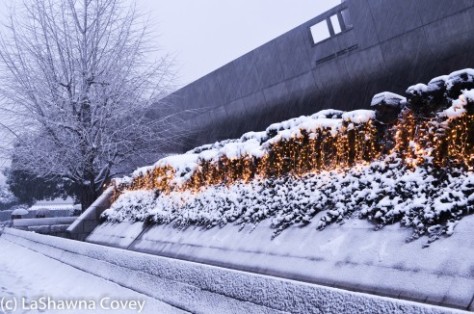 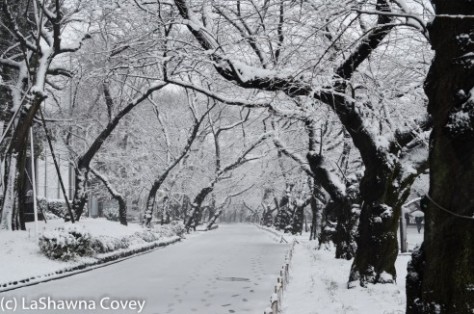 The snowfall was delicate and pure white, and it laid a gentle blanket over the trees and the paths. The streetlights and particularly the lanterns added some spot illumination to make you feel like you were in a winter wonderland, like Narnia. 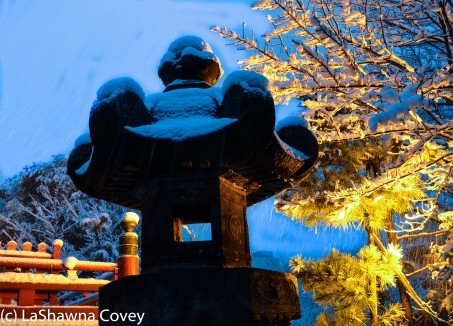 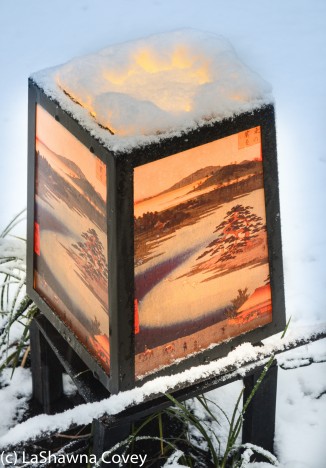 As it got darker, the otherworldly aspect of the city became even more pronounced. It was like the winter night scenes in The Shining (Stanley Kubrick version), only without a hedge maze or a madman with an ax chasing you.

Of course there is often a downside to winter snowfall, and that was certainly the case the next day. I woke up early, because I intended to go up to Nikko for a day trip. What I found is that the snow had fallen all night, and it was now several inches on the streets. But by this point, the temperature rose enough to turn to rain. Just imagine what you get when combine several inches of snow with driving rain. You get large pools of standing, cold, slushy water. My feet were soaked entirely through, and my train was canceled to due to heavy snowfall.

So even though the snow was melting fairly rapidly that day, there was still enough on the ground to enjoy the East Garden of the Imperial Palace. Parts of the garden were closed for the day due to the snowfall, but there were some winter blossoms on the trees.

The next day, the trains were running to Nikko, but the local buses weren’t. While Tokyo appears to have gotten four inches of the snow the day prior, Nikko got around 12 inches of snow, since it is located higher in the mountains. While the trains could get through, the roads hadn’t been completely plowed, and there was a danger of avalanches. I ended up returning to Tokyo shortly thereafter, because my day’s plan were ruined.

Later that night, I partook in one of Tokyo’s winter illuminations. It wasn’t as colorful or elaborate as the ones I visited in Korea, but it was nice nonetheless. A very long stretch of road behind the Marouni Building was lined with trees illuminated by clear lights. It was pretty, though I love me some garden illuminations. The crisp winter coldness and the cold, clear lights was a perfect accompaniment to the absolutely delicious sakura chocolate latte with sakura whipped cream topping as I walked up and down the street. 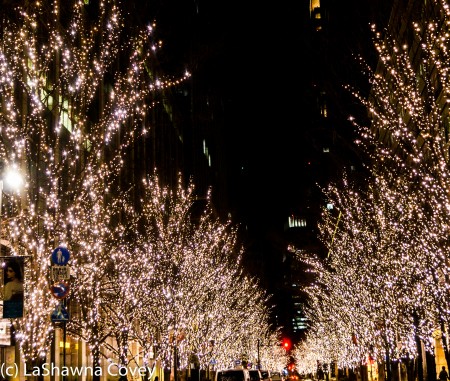 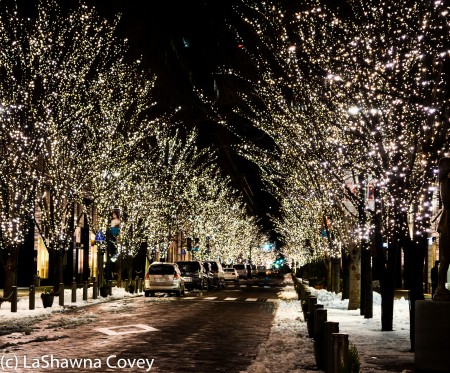 What I learned from this trip is that I need to be judicious in selecting winter vacation destinations. It’s one thing to pick something you know will be filled with snow. But you also run the risk that things will be shut down due to the weather.

But I did get my fix of beautiful winter landscapes. I got my fix even more when I was editing the photos. I recently took a digital photography class, and part of the class was a licensed copy of Adobe Lightroom 5. Even though I shot my Tokyo photos in JPEG, as opposed to RAW, it was quite interesting to see what I could do with the software to pretty up the pictures. I was going for photo enhancement that just bordered on appearing to be paintings.

One thought on “Tokyo in Winter”