In the past few years, the walls have been completely reconnected again, so now it is possible to travel around the entire wall. The wall length is about 8.75 miles or 14 kilometers. The city wall is quite wide, and for the most part, fairly flat and easy to traverse. You can walk around the wall, you can ride in a golf cart, or you can do what I did and highly recommend, and bike around the wall. 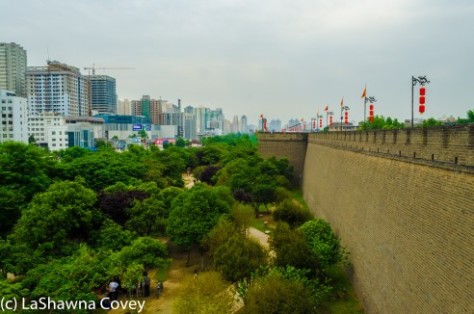 The city wall is open from about 0800-2200 daily and costs about 54 yuan for admission. I chose to go up the wall around late afternoon to early evening. I figured it would be the perfect opportunity to see the walls and the city during daylight, but be around for after the sun sets and see the city and walls lit up at night.

Originally I figured I would walk around the wall, which would take about 3 hours at the speed I walk, not assuming lengthy stops for photos and enjoying the view. However, I am very glad I decided to bike around the walls. It only took me about 90 minutes to bike it, including stops for pictures. Of course I wasn’t just pedaling along at a leisurely pace. There are parts of the wall that are very scenic and the view is very captivating. However, there are also plenty of sections where the view wasn’t anything special. These times allowed me to get some speed going. There was something very freeing about speeding along the top of the wall with the wind whipping through my hair and the city sights speeding by.

The most scenic spots on the wall, and also the most crowded, are around the four main gates. The most common place for entry into the walls is at the South Gate (Nan Men), with the second most popular entry being the East Gate (Dorg Men). It is also possible to enter at the North and the West Gates, but they are not as popular. It seems like most visitors to the wall congregate around their gate of entry, enjoy the sights and then leave. Once you get past the gates, most of the wall is fairly empty, and it is easy to bike. 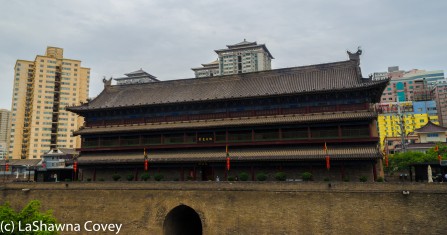 It was interesting to see the city from this vantage point and provided a good view of the contrasts of Xi’An. Before I came to Xi’An, I had visions of the city being sort of the Chinese version of an old, well-preserved walled city in Europe. I was disabused of that notion real quick, because Xi’An is a very modern city. Sure there are definitely remnants of Xi’An’s rich, ancient history, but they are tucked away or right next to something new and modern, so you have to search them out. 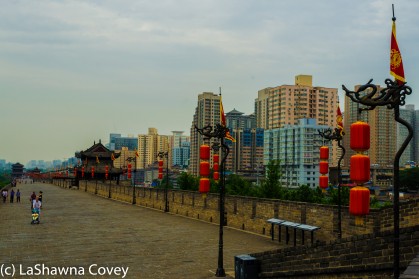 I could see the very modern buildings that populate the city center, and particularly outside of the walls in the surrounding suburbs. It really provided an overview of how Xi’An has evolved into the city it is. I could see the desperate poverty of buildings that could be best described as veritable slums juxtaposed against super modern Western luxury stores just several blocks away. I could see the contrast of the ancient city walls overlooking McDonald’s and Kentucky Fried Chicken.

After my bike ride around the city walls, I just relaxed and took in the view and waited for night to fall. Once it did, the walls lit up. The walls themselves are lined with lights, along with the rampart towers and red lanterns. The city looks bright at night, in contrast with the gray haze of daylight. The view was very beautiful, and peaceful, because by this point, most of the people weren’t on the wall, except around the South Gate and there was silence around me. The weather was also cooler after the sun set, and there was a mild pleasing breeze. 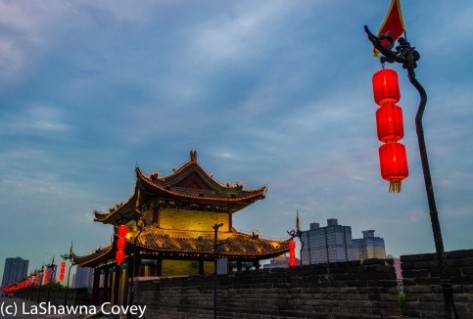 Once darkness fell, the view of the city walls was very entrancing. 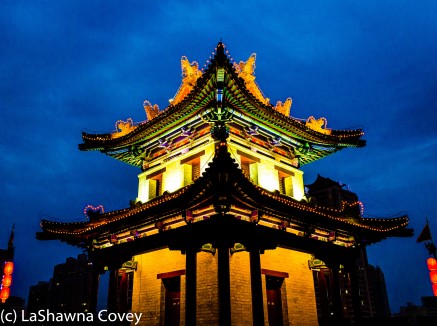 Definitely don’t pass up the opportunity to visit the city walls when you visit Xi’An. It’s a unique opportunity to see the city, and biking is a great option. It only costs 45 yuan to rent a single bike for two hours, and that is more than enough time to ride around the walls and enjoy the views.