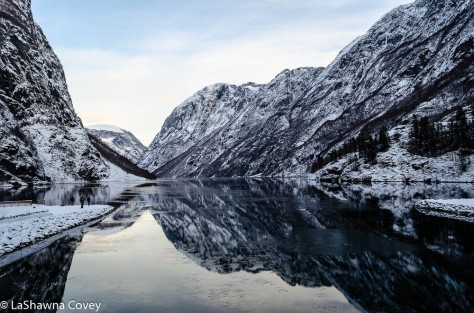 When I planned our winter trip to Norway, I tried to develop an itinerary that was comprehensive and made sense. I mean, we started up in the far north of Tromso to maximize Polar Night. Then we took a cruise down the Norwegian coastline to Bergen and spent a few days there. Now it was time to make our way to Oslo, where we would spend the remaining days of our vacation. 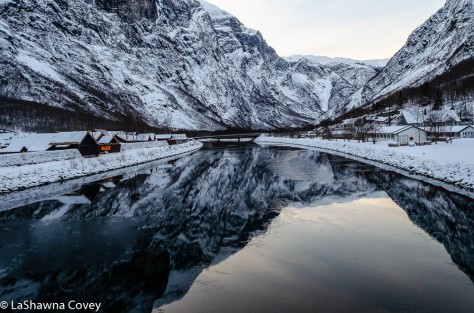 There are a variety of ways to get from Bergen to Oslo, but I chose the route that seemed the most fun, and gave us the greatest opportunity to see the beautiful Norwegian landscapes, though this choice was far from the cheapest. Tourist offices in Norway offer a wide variety of day trips and multi-day trips, and one of their most popular day trips is called Norway in a Nutshell. There are a variety of versions of this trip, with different routes and itineraries, all of them designed to give the traveler the most bang for their buck and see as much as possible of that route in a given day (though you can extend a trip by stopping in one of the various towns for a day or two). 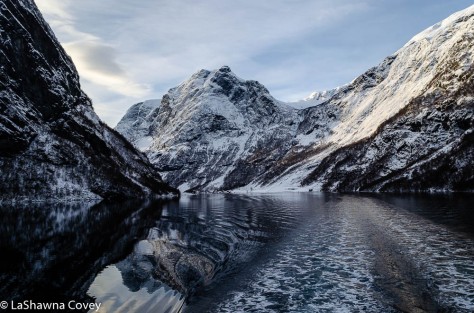 Norway does a pretty good job of offering winter tours, though for obvious reasons, they aren’t as extensive as summer tours. But they do have one winter Norway in a Nutshell, and you can do it from Bergen to Oslo or Oslo to Bergen. Both itineraries are the same in terms of stops and even in terms of trip length. I booked it in advance with my travel agency, and they took care of everything, including arranging for our bags to be picked up. That option took a load off my mind, because I was just picturing my poor mother dragging her suitcase through the Norway snow and ice (or me dragging both of our suitcases) at every stop and wrangling them onto buses, boats and trains. But nope, you can pay extra to have your bags picked up in Bergen, and they will be dropped off for you at your hotel in Oslo. It’s not the cheapest option, but I would rather spend money for peace of mind and convenience, so all we had to carry were our day packs. 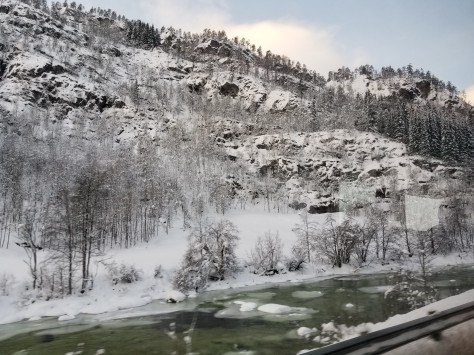 The day trip from Bergen to Oslo starts early and ends late. We left Bergen by train early in morning, just as the rising sun was turning the snowy winter landscape blue. By the time we got off the train at Voss, the sun was completely out. From there, there is a marked bus from Voss to Gudvangen. The bus trip was also very beautiful, as everything was covered in snow (which it wasn’t in Bergen). The bus dropped us off at the tiny, tiny village of Gudvangen. We had some time to kill before our boat arrived, so we took the time to take in the awe inspiring views. We were at the end of a fjord, and the tall, snow covered mountains surrounded us. But to make the view even better, the water was super still and clear and provided these astounding reflections of the mountains. It almost looked surreal.

Our next part of the trip was an electric boat ride through Naerjoyfjord, which is one of the smallest fjords in Norway. The passageway is rather narrow by fjord standards, but it packs a lot of beauty into such as small area. It was pleasantly chilly out on deck, but the never ending beautiful views made it all worth it. The boat ride lasts roughly two hours and ends at the tiny, but pretty village of Flam, which is off yet another fjord, Aurlandsfjord. 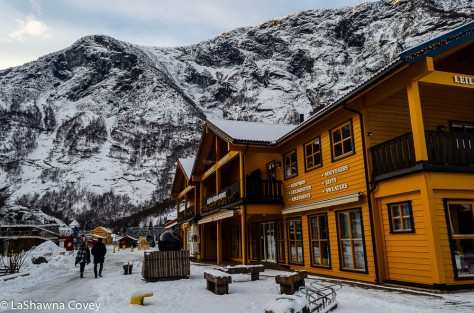 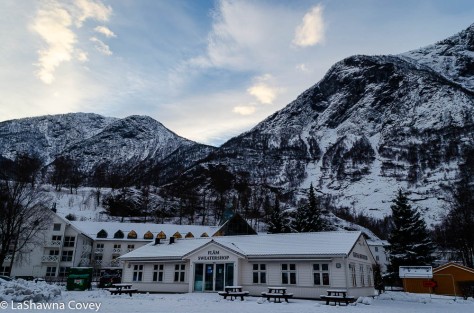 The town itself was covered in snow, and it looked the picture of a charming, Norwegian traditional village. We had a pleasant lunch and then just walked around taking pictures, doing some shopping and just relaxing. 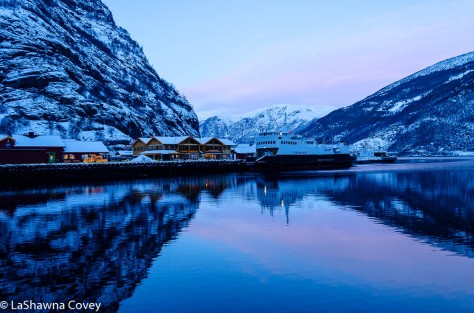 It is here that part of me wished I had chosen something differently. See, when you sign up for the trip, you are given an itinerary, with departure times and tickets. Our departure out of Flam via the Flam Railway was scheduled for after 4 pm in the afternoon, which would have been perfectly fine in the summer. But in the winter, it was right around the time it would start getting dark. In fact, the sun was definitely low by the time we departed Flam, and it was completely dark by the time we arrived at Myrdal. Part of me wished we had taken the earlier train out of Flam, just because the views from the Flam Railway are supposed to be spectacular, and it is considered to be one of the most beautiful train rides in the world. 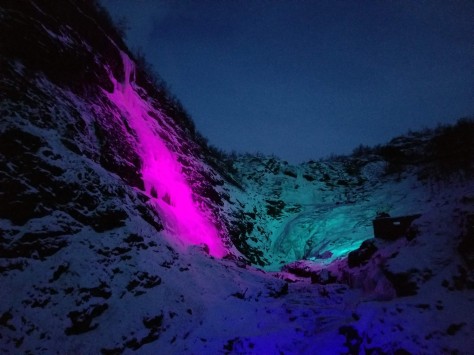 But even though we didn’t get to see EVERYTHING, we saw enough and I felt we got our money’s worth. The one fun thing is that there are a couple short photo stops on the Flam Railway, the longest being at the Kjosfossen Waterfall. This waterfall is one of the most popular stops in Norway, and I was worried that we wouldn’t stop at the waterfall, because it would be dark by that point. But fear not, stop we did, and the waterfall was lit up with colorful lights. It certainly looked like it was frozen over, and it would have been fun to see in daylight, but it was still good enough in the dark. 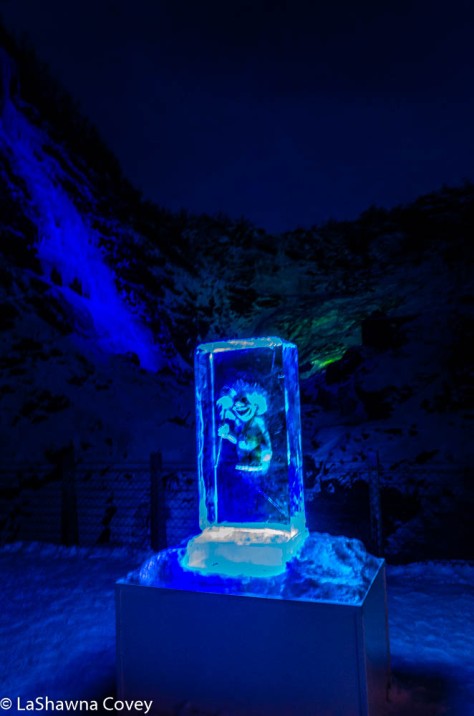 The Flam Railway ends at Myrdal, and from there, we picked up another train to Oslo. We still had some hours to go before getting to Oslo, but at this point, all we had to do was sit back, relax and enjoy the ride. We didn’t arrive in Oslo until after 10 pm that night, so the full day trip itinerary takes over 14 hours. I’m sure it is even more beautiful in the summer, since the sun is out for so long. But I think it is still a worthwhile trip in the winter. If you love beautiful winter landscapes, you will definitely get your fill on this particular day trip. It is probably the most beautiful way to get from Bergen to Oslo, or vice versa. 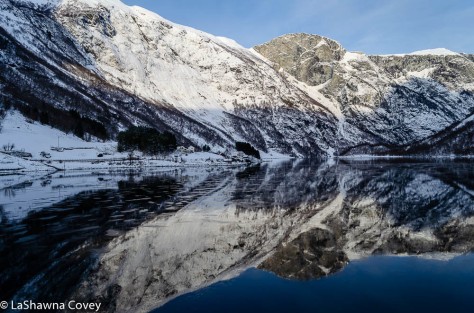