The previous weekend, I made my way south to Andong for the Andong Mask Festival. The two-week annual festival is held in two main areas: the Mask Festival site in town (the subject of the next post) and the Hahoe Maeul Folk Village. If you’ve been to the Korean Folk Village in Suwon, the first thought could be that this village is another sort of museum. However, this is a real, living village for people to live and work.

Hahoe is a village where the Ryu family originated and where its descendants have lived together for 600 years. The tile and thatched roofed homes have been preserved for hundreds of years (though undoubtedly reinforced with modern construction), even though the village dwellers have modern conveniences like cars, electricity, running water, indoor plumbing and satellite television. 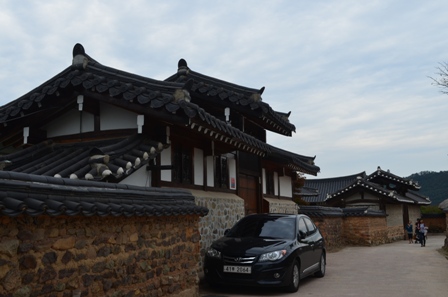 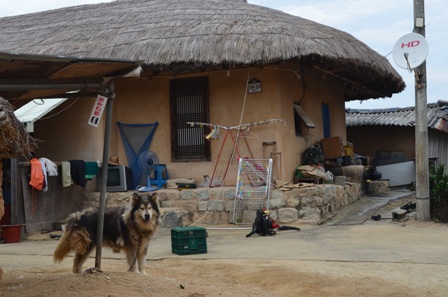 The village is a pleasant place to spend a couple hours. Visitors can walk through the village peacefully among people living their lives. There are restaurants and stores for visitors, and there are just normal homes for individuals to live their lives.

The village is tucked among the surrounding mountains and is set along the Nakdong River, which flows are the river in a S shape and gives the village name. Ha means river and hoe means turning around. 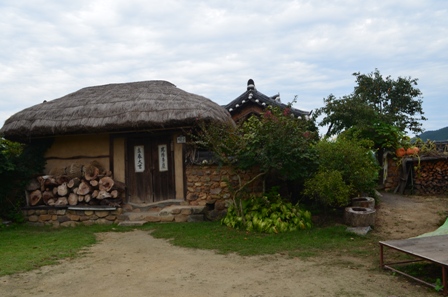 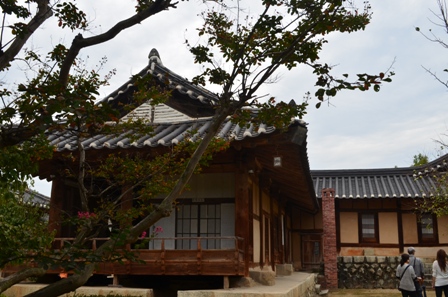 Visitors can walk around the village and peek into open doorways of walled homes to get a glimpse of normal village life. 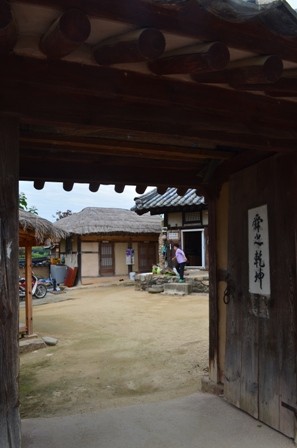 In the center of the village resides the Samsindang, called the Samsin Goddess Tree. The zelkova tree is 600 years old. The tree is in the residence of the Samsin Goddess, who oversees pregnancy and child birth. Visitors can leave wishes around the tree. 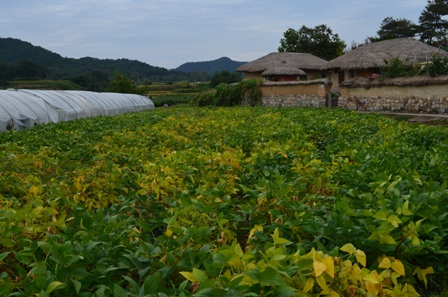 Andong is very easy to reach from Seoul by public transportation. There are numerous daily buses from Dong Seoul Bus Terminal, but I prefer the train if there is that option. Most of the trains leave from Cheongnyangni Station (a stop off subway line 1). There are approximately seven trains daily and the direct train ride lasts approximately four hours.

From the Andong train station, Hahoe Maeul is pretty easy to reach, but don’t make the mistake I did. I got on the wrong numbered bus and it wasn’t just the wrong bus, but it was also heading in the wrong direction. I’m normally very good with directions, but sometimes I have to guess when it comes to vague directions. My guide book said I could take the #3 bus and it was supposed to go to Hahoe Maeul. That is not true. I ended up at the Andong Culture Complex (I saw that on the bus, and thought that was the right destination) and there was no one around and quickly figured out I was in the wrong place. Thankfully another bus came along shortly after that and I went back to the train station. If you take the bus to Hahoe Maeul, you need to take bus #46. Cross the street from the train station and head left to the bus stop. There are buses to the village approximately once an hour, and the trip takes approximately 30 minutes. However, if you don’t want to wait, you can easily take a taxi to the village, and the cost will be approximately 30,000 won (less than $30 USD depending on the exchange rate).

Hahoe Maeul is an interesting view into how villages used to look several hundred years ago, but it blends well into the modern world.