The Jinju Namgang Lantern Festival is another festival I almost went to last year, but got lazy. But now that I only have one year left in Korea, I am compelled to do all the things I want to do before I don’t have that opportunity anymore. I absolutely love lantern festivals, and this festival is a bit different than the Seoul Lotus Lantern Festival in the spring to commemorate Buddha’s birthday.

The festival is held along the Namgang River and the Jinju Fortress (Jinjuseong) across the river. I got to the lantern festival right as it opened early in the morning. I wanted to maximize my time at the festival and not feel rushed. For the first few hours, crowds were very sparse. Which is understandable, since the lantern festival really comes to life after dark. It was very peaceful walking along the river or just sitting by the water admiring the floating lanterns. 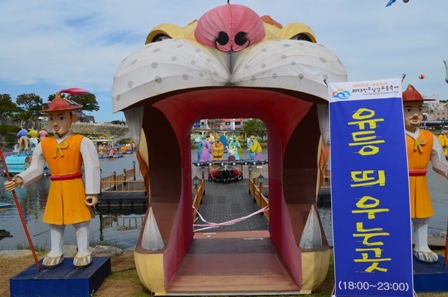 The lanterns are spread out on the water. The lanterns are a mixture of traditional Korean tableaus, Disney fairytale characters and international symbols, like the Statue of Liberty and the Sphinx. There are numerous floating bridges crossing the river (for a small fee of course) so you can easily get back and forth across the river for both parts of the festivals. 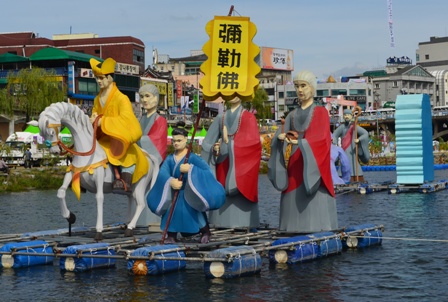 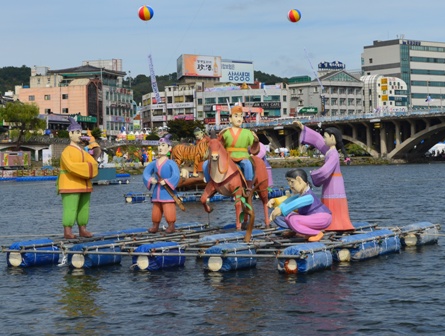 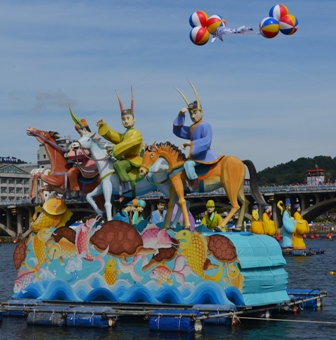 The lantern festival is also held in conjunction with the Gacheon Arts Festival and the Jinju Silk Festival. All the festival events and activities are on the river, so you can enjoy a wide variety of activities from all festivals, like enjoying local artists’ paintings. The lantern festival has a wide variety of Korean and international food booths to eat your way through the day. Like most Korean festivals I’ve been to, there were also experiential booths to make your own lanterns, some of which you could light with candles and float in the river at night or desire wish lanterns you can hang up in the lantern tunnels. 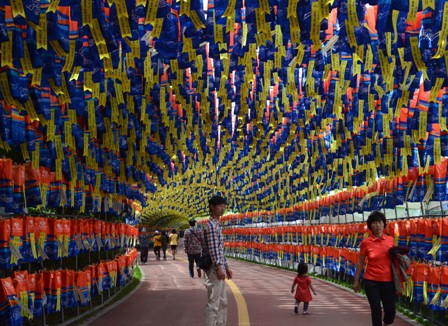 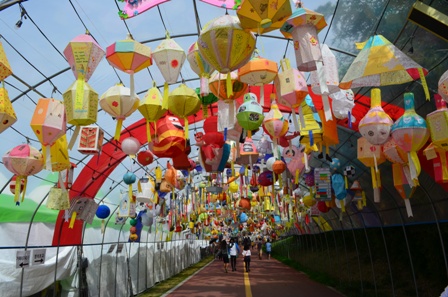 The other main section of the lantern festival is held across the river at the Jinju Fortress. The fortress was first used to defend the region during the Japanese invasion Imjin Waeran in 1592/1593. The fortress is now reconstructed, and within the walls, there are a couple of temples, shrines and the Jinju National Museum. A wide variety of lanterns are set up in Korean traditional tableaus such as traditional Korean fairy tales and the Korean military forces defending the fortress. 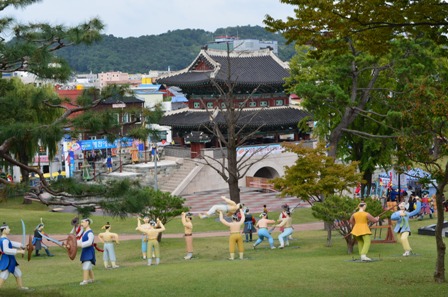 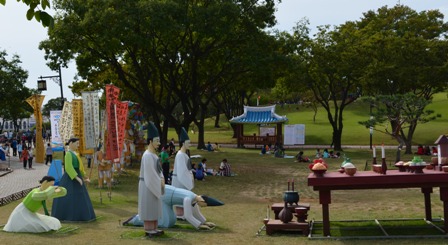 Throughout the day on the fortress premises there were a wide variety of Korean traditional folk performances like musical dance performances and examples of Korean martial arts.

Jinju is very easy to reach from Seoul. There are numerous buses from Seoul’s Gangnam Express Bus Terminal to the Jinju Express Bus Terminal. I chose to take the train, just because I prefer trains if they are available. The direct KTX train from Seoul leaves several times a day for the three and a half hour trip to Jinju. Know that if you take the KTX train, the train station is south of the city center, not within walking distance. I would recommend that unless you speak Korean, it might be best to take a taxi (approximately 15 minute drive) to the city center. I originally took the bus to the festival and ended about a 2 km walk from the festival site.  The Express Bus Terminal is located about a 20 minute walk down the river from the lantern festival.