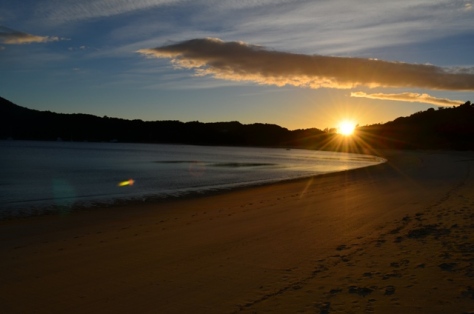 This morning , the second day of hiking, was even earlier for me than normal. It’s funny that when I am at home on normal weekends, I often like to sleep in. But on vacations, I am usually up early to take advantage of the day. Of course it is also easier, because I tend to fall asleep earlier, because I don’t go out and party. And since there was no electricity or Internet at the Anchorage hut (or any of the Department of Conservation huts for that matter), and I was hiking alone, I was down for the count by 2100 to get a full night’s rest. 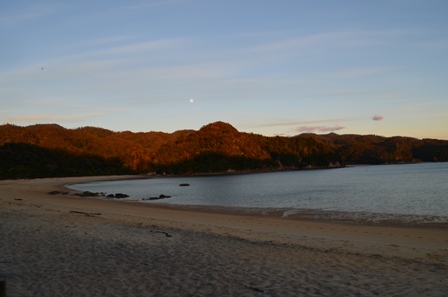 I woke up at 0530, shortly after sunrise. In fact the moon and the sun were out at the same time. This morning was earlier than normal, because I wanted to use the low tide track across Torrent Bay to shave off 3 kilometers or one hour of walking. It doesn’t sound like a lot, but my foot was still hurting from the previous day’s blister, and my body was still getting used to carrying a multi-day pack. The day’s walk was only 9.5 kilometers, which equated to only three hours of walking. But I needed to be across the bay by 0730 before the tide rose too high for me, since I could only use the low tide track two hours on either side of low tide, and I had to take the all tidal track.

So away I went, and it was an excellent decision. It was the first time to walk across a tidal track at low tide. I crossed Torrent Bay by following the orange disks which mark the trail in places like beaches and tidal flats when the trail isn’t obvious. But most of all, the reason my early start was a good one, was because I had the track nearly entirely to myself. Most people were still sleeping when I started walking. In fact, I only saw one other person on the track until I had nearly completed my day’s walk. It was awesome to practically have the park to myself, and enjoy the beautiful nature in peace and solitude. 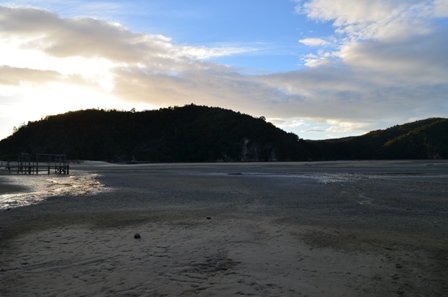 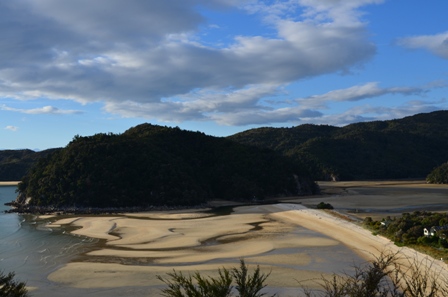 The track wended its way up and down hills and across the river. Most of the time I walked in lush, beautiful coastal forest, but every so often, the trail would open up to spectacular vistas of the sun, sea, and gorgeous coastline. 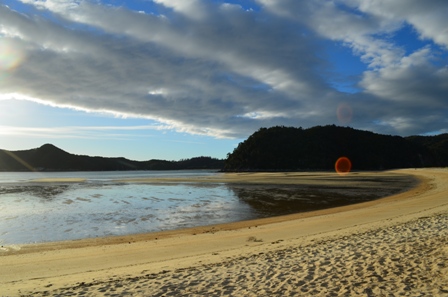 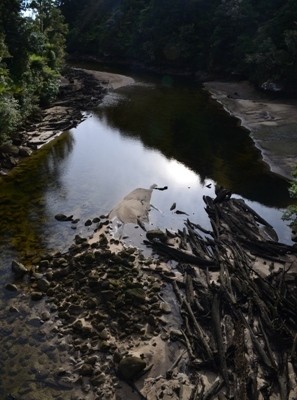 I set out so early that I arrived at my destination shortly after 0900. In fact, I couldn’t even occupy a bunk, because the previous night’s occupants were still there having breakfast and hadn’t left yet. Another advantage of being so early was getting to pick my bed. This hut had three rooms for bunks. Two of them had space for 14 bunks, but the upper and lower bunks were wide open where all seven mattresses were pressed up against each other. A room tucked in the back had six separate bunk beds, and since I didn’t want to sleep next to a stranger if I didn’t have to, I snagged one of the individual beds.

All I had to do all day was relax on a beautiful beach, read a book and be lost in thought. I had hoped to go swimming, but it was too cold that day. The day started out sunny and warm, but turned gray and rainy and chilly by early afternoon. That gave me an excuse to curl up with a good book (I even managed to finish the book that day).

Later in the evening, the rain stopped and I made my way down to the beach and marveled just how different it looked at low tide. It was very peaceful to watch the waves crash gently on the beach, the tidal force inexorably drawing the waves higher and higher as the tide slowly rolled in.

I could close my eyes and just hear the wind, the sea, and the occasional bird call, but no human beings. It was just me and nature. 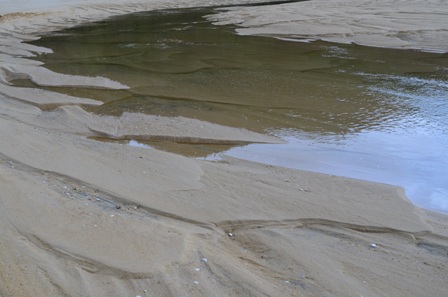