There aren’t many pictures for this day of hiking, and it wasn’t an accident. The weather just did not cooperate enough for me to take many pictures after I left Luxmore Hut. And the few times the view would open up, I was too wet, cold and unmotivated to dig my camera from my bag.

For my second full day of hiking, I had hoped for sunny skies and minimal wind for this trek, since it was an alpine crossing. Alas, it was not to be. Instead of being treated with panoramic and gorgeous mountain vistas, I was treated to lashing wind, freezing rain and low clouds. I had envisioned my alpine crossing would be as majestic as the opening scenes of Lord of the Rings: Two Towers when Aragorn, Legolas and Gimli were chasing the orcs. Instead my day looked more like the scene in Lord of the Rings: Fellowship of the Ring when the fellowship tried to cross the Pass of Caradhras and were beset by howling wind and stinging snow. Of course I had no big strong man like Boromir to shelter me from the storm, so I was on my own to deal with the weather.

Sometimes the clouds would clear enough to get a hint of the majesty they covered, but for the most part, all I could see much of was the trail in front of me (thankfully for that, because who wants to get lost and stranded in an alpine environment). Most of the hike sidled mountains and crawled along ridge lines. There were brief moments, I got a glimpse of the awe-inspiring view around me, obscured by the thick, low clouds, and could see what this hike is like in very good weather. Alas those moments didn’t come often enough or last long enough. I can honestly say that I have not been this wet and cold, for such a sustained period of time, ever. For a brief period, I envisioned succumbing to hypothermia, but thankfully it never got THAT bad. I had my thermal and rain gear on, though I should have worn my rain pants. But still, I got soaked. By the time I finished the day’s hike, my socks were drenched, my shirt was wet, and my pants were soaked through, and I was cold. 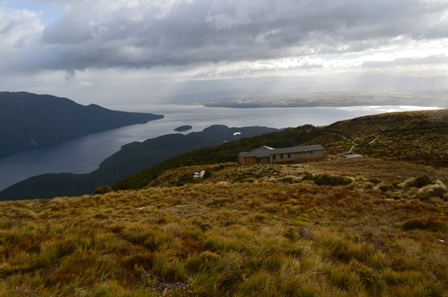 Most of the alpine trek was not TOO difficult physically for most of the way. There were some significant ascents, but they were mirrored by descents and flat spots. However, by the time I hit Hanging Valley Shelter (over three hours into the hike), I was officially over it. By that point, I was really starting to feel the rain and cold, and the path got rockier, muddier, and more uneven (a recipe for me falling on my cold ass). I was never so happy to reach the bush line. Yes, it was still raining, but at least the water fell directly on my head, rather than lashing harshly against me.

The frigid wind died down, and the temperature went up a few degrees. So I was able to go from miserable to just uncomfortable. The trail dropped, seemingly endlessly through the bush. The beech tree forest was lovely to behold as were the natural waterfalls cascading down from all the recent rain, and the raging river.The walk seemed interminable and I was passed left and right by tall Middle Earth elves, and I trudged along on my short hobbit legs. At this point, I just wanted it to be over for the day and kept wondering when the hut would come into sight.

Eventually the forest opened up, the birds and the angels started singing, and a halo of light shone down on the hut. At last! I had warmth and dryness and semi-comfort. It was practically heaven-sent. I actually wasn’t in a lot of physical pain from the trek, because it wasn’t that difficult (except for a few, steep, rocky ascents), but mentally I was done and just wanted to snuggle up something (or preferably someone) warm, soft and dry.