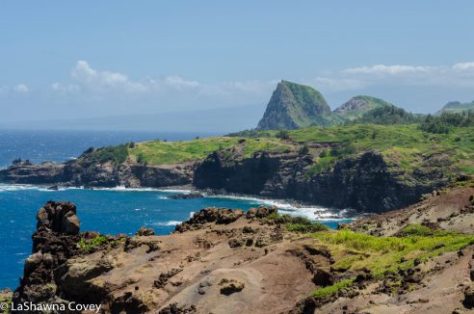 A while back, I was in Hawaii for work and I decided to take about a week’s vacation on the back end to travel to Maui. And it worked out that my mother also planned a trip to Maui for a week after I was going to leave, so she just backed up her flight to come several days early and we could pal around Maui together together before her friends arrived. Since I tend to be a combat traveler when I am on a limited time, I packed our 10 days with so much stuff that gave us a good overview of Maui (with the exception of southern Maui, since I knew she was going to be based out of there on her trip with her friends). 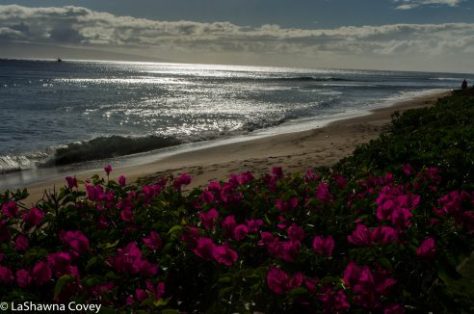 The first stretch of our vacation was four days on Ka’anapali Beach. There are so many hotels on that stretch of the beach that it makes it very easy to pick a place to stay. Most of the hotels are right on the beach or very near the beach, which makes things very convenient. Ka’anapali Beach is centrally located in western Maui, so it is easily accessible to the larger town of Lahaina to the south and the more isolated stretch of land to the north. It is also a great place to walk along the long stretch of sandy beach, swim in the ocean and enjoy the sunsets. 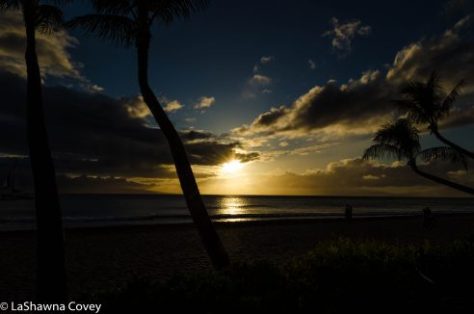 We used our hotel in western Maui as our base for the first few days, and we went ziplining, snorkeling out at Molokini Island and driving up the coast to the north. It is actually possible to drive all the way around the north of west Maui, though there is a stretch of one-lane road that is supposed to make the drive a bit nerve wracking. On our trip, we weren’t able to drive all the way around on our long drive thanks to traffic congestion around the village of Kahakuloa on the one lane road. However, we were able to complete the drive from other side of the island on our last day in Maui together. 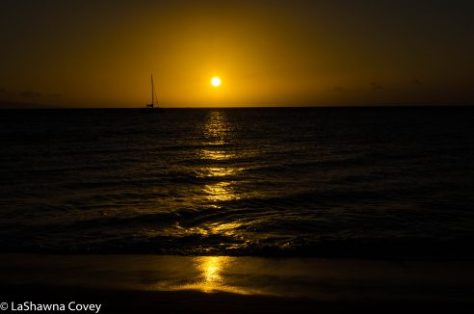 We didn’t spend too much time in the town of Lahaina, as there were plenty of restaurants around Ka’anapali Beach, but we did make one stop early morning for breakfast. This enabled us to find a decent parking spot (it is gets extremely crowded later in the day), and made our stop at Banyan Tree Park more pleasant as there were less people crowding the park (and thus getting into my picture frame).

I knew the tree was big, but I didn’t appreciate just how big until I was standing in front of it. When you first look at it, you think the park is a collection of smaller banyan trees, but nope, it is one large tree that has spread its roots all around. It is quite the site to behold, even if you can’t climb it.

For this particular drive, I pretty much followed the suggestions from the travel guide, Maui Revealed: The Ultimate Guidebook by Andrew Doughty, which was filled with lots of great tips on places to stop, both of larger interest and more niche interest. The book also provides some very good tips on directions and parking and the like, which is very helpful for some of the stops.

After leaving our hotel, we drove north on Highway 30 and our first stop was Makaluna-puna Point that had the Dragon’s Teeth, located in the village of Kapalua. Parking was limited out there, but we were there early enough to get one. From the parking lot, it is only a short walk out to the point. The rock shapes out here are rather different than other rock formations on the island, due to the salt spray from the ocean.

The day we were out there, it was fairly windy and not too crowded, but the site itself was rather entrancing to behold, just because it was another example of the power of nature.

Just a short walk away from the point is the view to Oneloa Bay, but the most interesting thing was this sacred maze on the ground made out of rocks. 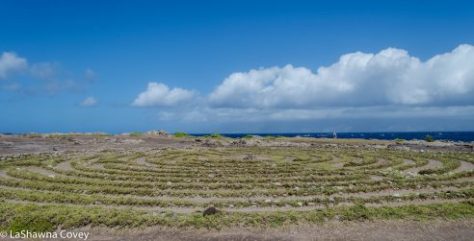 Continuing the drive north, we stopped at Honolua Beach, because it was considered to be good for snorkeling. There is limited parking along the side of the road (again, good thing we were early), but the walk is short down to the beach. The view was pretty, and the water was pleasant on this sunny day, so we decided to do some snorkeling. You had to swim a bit ways from shore to get any decent snorkeling, but once you got into deeper water, there were some good sights out near some reefs. It certainly wasn’t the most amazing snorkeling, but it was fun, with a variety of fish. 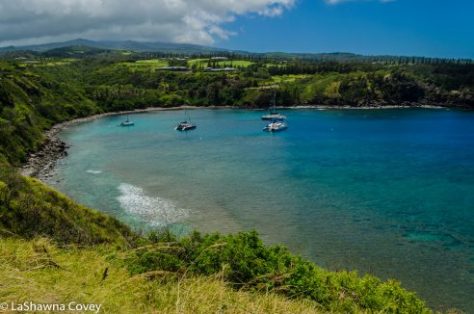 The drive north around the western part of Maui was definitely uncrowded when we did it, so we stopped plenty of times to enjoy the view of the cliffs and of the ocean.

One of the views was of the Olivine Pools, which are these beautiful and swimmable tide pools (sort of, but not really) right near mile marker 16 on Highway 30. Mom and I decided not to venture down to the pools, as they certainly were not without people, and neither of us relished the idea of scrambling down the rock to get to them and then scrambling back up. 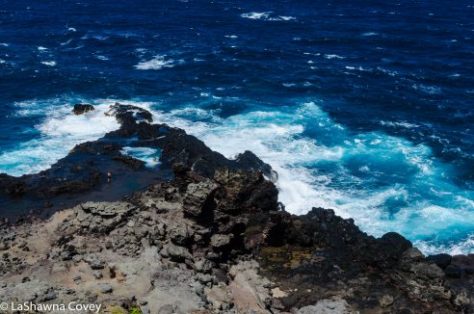 Like I mentioned at the top of the blog post, our original intention was to drive all the way around the peninsula and then come back to our hotel. Alas it was not to be. The road turns one lane around the village of Kahakuloa, and apparently there was some sort of traffic congestion (we heard one of the tourist drivers had a panic attack from the narrow road and had to be coaxed to turn around, but I have no way of knowing if that was true) that formed a long line of cars at least a half mile long. Not wanting to wait, we turned around and went back to our hotel.

However, on the last day of our trip, we were able to complete the circle by driving it from the eastern side and Wailuku. The first stop we made was at the Iao Valley, which is a short drive off the junction of highways 30 and 330. It is pretty easy to get to, though I warn that the parking lot is not THAT big (and costs $5) and we ended up having to park along the road and walk in.

The stop isn’t an exceptionally long one at Iao Valley, but it is very attractive, even though it is the site of a tremendous amount of death during a war over three hundred years ago. Today, it is set up as a short walk around the valley, looking at the beautiful views and the abundant plant life. The scene reminded me of Kauai at times. 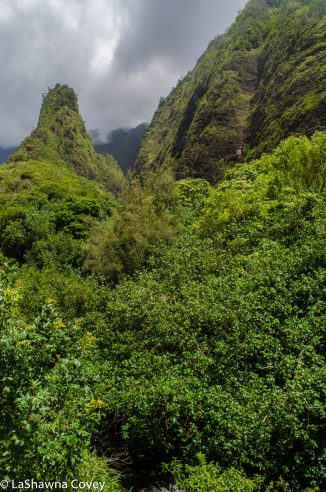 After that stop, we still had some time to kill, so we decided to drive around to Kahakuloa village from the eastern side. We were tempted by the promise of delicious banana bread that was heavily touted in our guide book. Sure there are numerous banana bread stands in Maui, but this one called Julia’s was reputed to be the best. For the most part, the drive is pretty solitary, as there weren’t too many places to stop, and I was grateful for the lack of vehicle traffic in some part, as part of the road is rather narrow.

We very much enjoyed our time in western Maui for a few days and then prepared to head eastward out to Hana and upcountry to complete our trip. One of the best things to do in western Maui is just to leisurely drive around the peninsula, stopping every so often to admire the view, walk along the beach, or even go for some snorkeling in some of the more protected areas.