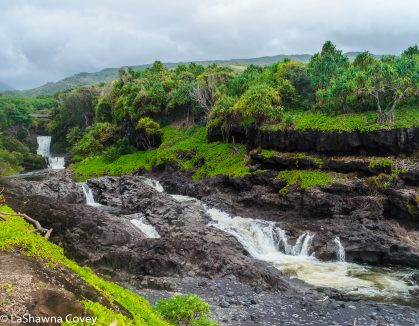 There are many pleasures to doing the Hana Highway as a two-day or more trip. I have detailed all the number of beautiful nature sights along the highway itself (the sheer number of waterfalls is spectacular, especially during the rainy season). However, there is another benefit, and that is skipping most of the tourist crush. Since most tourists do the Hana Highway as a day trip, that typically means they start early and stop mainly at the big sights or for a short time at each of the sites. That allows the multi-day trippers to start later in the morning so the sites are not as crowded when they arrive. It also allows the tourists who do stay overnight in Hana to reach Haleakala National Park before the crush of tourist vans later in the morning or early afternoon.

When most people hear “Haleakala National Park”, their thoughts assume it is just the mountain summit and immediate areas, but the park also extends from the mountain top down through the valley, the Kipahulu Gap, all the way to the ‘Ohe’o Gulch (also known as the Seven Sacred Pools), which is an absolutely gorgeous series of small waterfalls.

The day we went out to this area, the day was a bit cloudy, but it was still warm and a bit humid, so the scenery was not as bright as it is during a bright, sunny day. But it still felt like a lush, tropical wonderland. Since we started early in the morning, all the day trippers were still tooling along the Hana Highway, so it was not as crowded as it would become later in the day. That meant Mom and I could enjoy the waterfalls in relative peace without having to elbow gaggles of tourists aside to get a good photo.

After enjoying the ‘Ohe’o Gulch, I decided to hike up the Pipiwai Trail to see the Waimoku Falls. The trailhead for this hike is off the highway toward the ‘Ohe’o Bridge near mile marker 42, and there are well marked signs from the parking lot and ‘Ohe’o Gulch to get to the trailhead. The hike is only two miles from the starting point to the falls, so I decided to ditch the water bottle, which was kind of stupid on my part. While I can easily hike four miles with minimal water, this particular day was warm and a bit humid. While I didn’t come close to passing out from dehydration, I wish I had some cool water, because I was parched by the time I returned.

Since Mom and I had a full day planned, I didn’t want to take too much time ambling up the trail, so I set a fairly brisk pace for me, with a goal of less than an hour to get to the falls. The trail on the way to the falls is nearly all uphill and gains 650 feet in elevation, some of it steeper in parts than others, so I felt it a bit at the beginning. Like many hiking trails I’ve been on, the trail ascended rapidly in the beginning through a series of steps, but the trail did level off around the first mile. 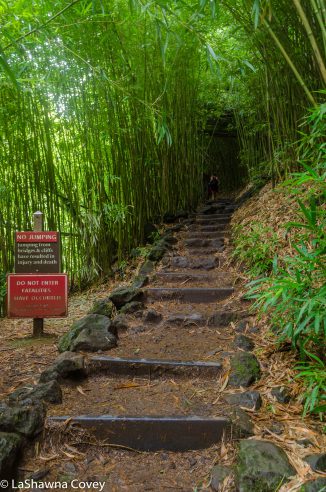 For the most part, the trail is not filled to the brim with spectacular nature. Yes, there are some very beautiful views on occasion, such as this very nice waterfall, Makahiku Falls which drops 200 feet (not obvious when looking at it from the overlook), that was located about 2/3 mile into the hike. When I was hiking the trail on this day, I didn’t see any lookout to get a very clear view of the entire waterfall, but I was able to get some reasonably good shots through the foliage. 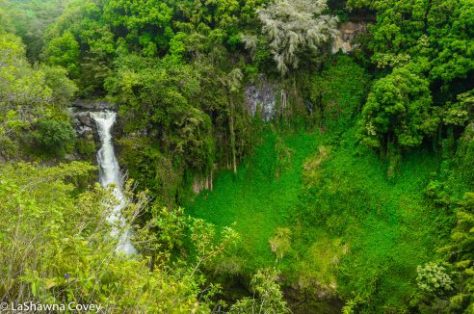 Continuing up the trail, I shortly arrived at a huge banyan tree just hanging out on the trail, which is perfect for photo ops. My guidebook detailed numerous side trips from this trail, but I didn’t see the trails for most of them and with my limited time, I wasn’t going to spend too much time hunting around for the trails.

Soon after that, I came to a couple of bridges that afforded some really nice views of the stream and some small waterfalls, which makes for a nice stop for photos.

After this, all of a sudden you find yourself transported to another land in the form of a thick bamboo forest. I’ve run into these type of forests in Japan, but not as much in my travels of Hawaii. I personally love bamboo forests, as the trees are just so odd looking but streamlined and beautiful. The ground during the bamboo forest was rather muddy, so it was very good that the trail is covered in a wooden boardwalk to keep your shoes clean and make it easy to walk on the trail.

I was starting to wonder when I would reach the falls, and shortly after exiting the bamboo forest, I came to the end of the line. The trail ends at Waimoku Falls, which is a narrow 400-foot waterfall down the rock wall. There is a sign near the falls that advise against getting closer to the falls, which many people ignore to get right in the waterfall pool. I was feeling the walk up and wishing I had some water, so I just sat back with a wide view of the falls and took all the beauty in.

Thanks to my brisk pace, it took me about 40 minutes to hike the two miles from the trailhead to the falls, which was faster than I had allotted for myself. I took plenty of time to catch my breath and take in the gorgeous view before deciding to head back down. The hike down was even quicker going down than up, because it was all downhill. If you are out in the Hana area, you really NEED to visit this part of Haleakala National Park (which most tourists do on their day trip, so they speed down the Hana Highway to get here before it gets dark), because the nature is just astounding. If you have the time (which I recommend you budget), the Pipiwai Trail is very much worth your time. It’s not THAT difficult, and all you need is a moderate level of fitness to see really beautiful waterfalls (assuming you haven’t overdosed on waterfalls already the time you get to the park). All in all, this was a great stop on your Maui extravaganza.