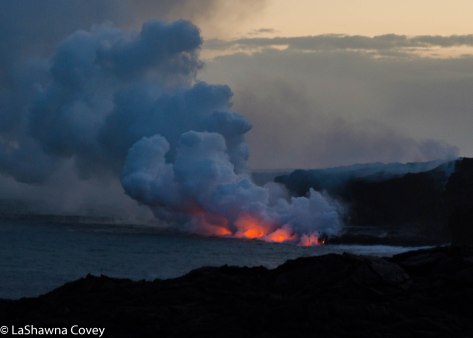 Several years ago, my mother and I were able to visit the Big Island of Hawaii and while we loved it, we didn’t get to see everything we wanted to see on my Big Island bucket list. One of those was lava viewing at Volcanoes National Park. The time we visited just didn’t have much in the way of flowing lava, so while the park was amazing to see, we missed out on some critical things we really wanted to see. 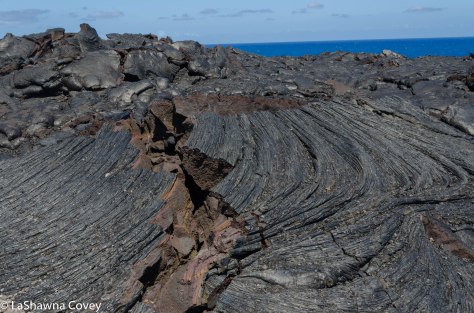 I didn’t mind it TOO much, if only because it gave us a reason to go back to the Big Island at some point in the future. Thankfully, that opportunity arose this spring, since I had to use a vacation package before it expired and decided to use it on the Big Island.  Luckily, for this vacation, there was an active lava flow from the volcano. Sure, it’s not like the lava was flowing from a place that was close to any roads and you can just walk up to it, but it was still possible to view the lava.

The easiest way to see any lava at all was by viewing the Halema’uma’u crater near the Jagger Museum at Volcanoes National Park. The Jagger Museum is a short drive from the national park visitor center and has some interesting exhibits, but one of the biggest draws is viewing the lava in the crater. 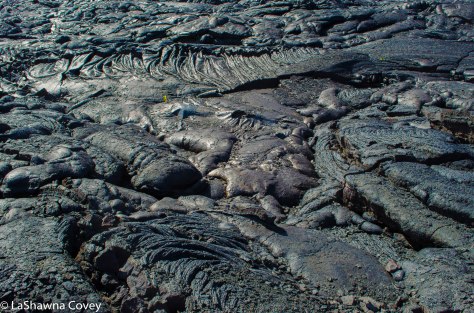 When we visited in 2011, it was possible to see a red glow in the crater after dark, but the lava pool wasn’t particularly high at that time. Combine that with some fog and rain (we visited in December, so the weather was raining most of the time we were at Volcanoes National Park), there wasn’t much in the way of lava viewing back then.

I was thrilled when I was reading up on the lava flow before our most recent vacation, so I figured there was a pretty good opportunity to see some lava, even if it was from a distance. We spent one very long day at Volcanoes National Park, and that enabled us to view the lava flow from a couple different vantage points.

The lava view from Halema’uma’u crater was much better this time around, since the lava flow was much more active. It was even possible to see some lava during the day. The viewpoint at Jagger Museum is about a mile from the crater itself, and is positioned well to see inside the crater. 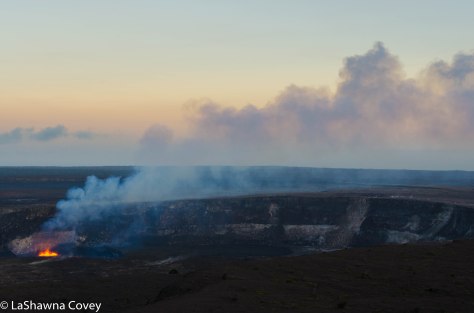 At night, the lava glow was even brighter than during the day. We got to the museum well enough before sunset, so we would have a good viewing spot before the hordes of crowds arrived. As the sun was setting, the moon was rising over the crater, with the cool white glow of the moon contrasting well with the warm red-orange glow of the lava. 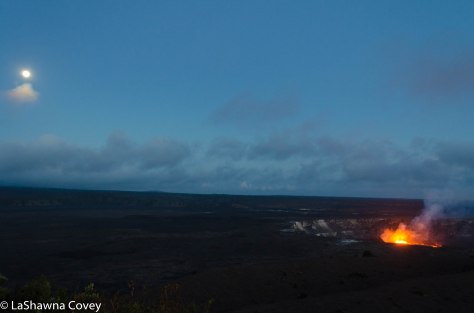 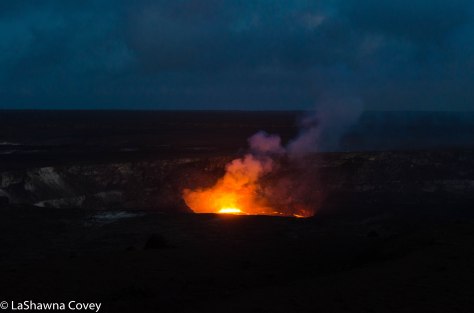 However, if you want to view a more active lava flow (even from a distance), it is currently possible.  It just requires a bit more preparation and physical effort to make happen. The lava is currently flowing into the sea between the border of the Volcanoes National Park to the west and the Kalapana housing subdivision to the east, and it’s possible to approach the lava viewing sites from either direction. 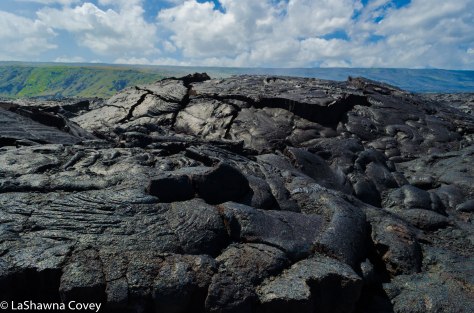 Either way is going to involve a multi mile trek to the lava viewing areas. When we visited Volcanoes National Park, we started walking from the visitor center at Chain of Craters Road (the farthest you can take your car before the road is blocked off to normal vehicular traffic).  This stopping point is a great point to get a view of the steam rising off the lava flow as it meets the ocean way off in the distance, and get a good look at the effect of the multiple lava flows over the years on the surrounding area. 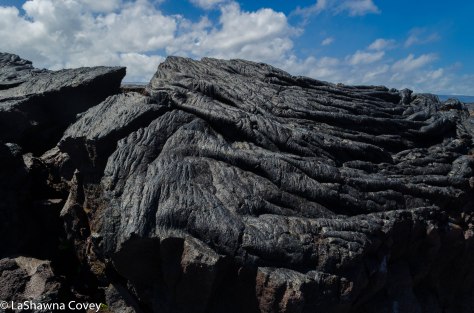 The area was actually a bit different from our 2011 visit. At the time, the lava flow went all the way across Chain of Craters Road so the road was blocked in the same place as now, though it was possible to walk over the lava. It was very interesting to see all the cooled and hardened lava, but it was pretty hard to walk and we didn’t stray far from roadblock. However, a few years back, the road was scraped of the lava and replaced with a gravel road. The point of this was for any potential emergency evacuations, but the end result is that it is possible to walk the road to about a mile from the lava viewing site.

From the Chain of Craters road, it is about a five mile walk to the lava viewing area, with about four of those miles on the scraped gravel road. Initially the walk was simply a lark to see how far we could go. When we started out, we didn’t quite realize the road was scraped all the way in, so we were just strolling along, figuring we would hit the end of the road soon enough and we’d turn around. We were definitely unprepared for any sort of distance walk (since neither of us expected to actually walk all the way to the lava viewing area), because we started out mid day when the sun was pretty fierce (the weather was actually warm and gorgeous every day we were in the park area) with minimal water. After about a mile, my mother turned back to the car, and I kept going, just to see how far I could get. However, I turned back after about 2.5 miles. I just didn’t have the supplies to make it there and back again safely. But that wasn’t the end of it, because we decided to try the other way to view the lava. 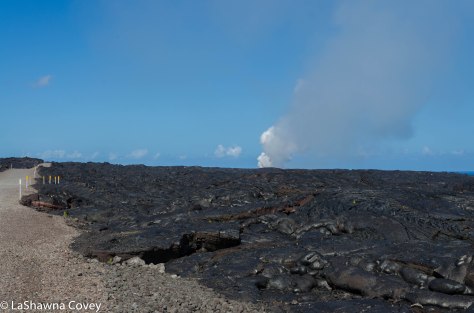 The Chain of Craters road approaches the lava flow from the national park in the west, but it is also possible (and right now easier), to approach the lava flow from the east. This land is on county land is a remnant of the former Kalapana housing subdivision that was eventually destroyed by multiple lava flows over the years. This approach is not only easier in a few ways, it is also more fun, and it results in a somewhat closer view than approaching from the national park side.

I read up online in advance that it is possible for visitors to walk the four miles on the scraped gravel road to the viewing site (which is a pleasant change from when county officials used to bar visitors from walking on the road due to safety and liability reasons), but many companies also rent bikes from the entrance point. Mom and I figured that it would be quicker to rent bikes, and pretty good workout in and of itself.

We headed out a couple hours before sunset, so would get to the lava viewing site with enough time to enjoy the view during daylight and watch it at night before biking the four miles back. I am glad we biked out there (because it took half the time of walking), though I would not say it was an easy ride (but then again, I am not the fittest person around, so a fitter person would have an easier time of it). I hadn’t ridden an actual bike (as opposed to a stationary bike) in a few years, and the road was not paved, but rather gravel. As we biked out there, we could see the steam clouds getting closer and closer as we approached the viewing site. The surrounding area looks much the same as the view from the national park with undulating rolls of hardened black lava as far as the eye could see. 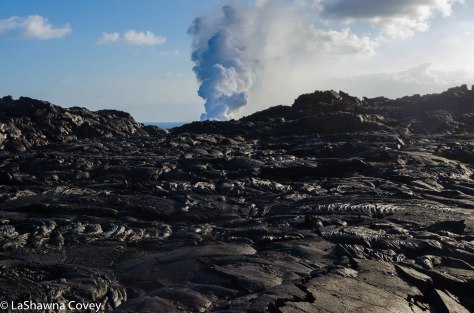 However, we still made good time out to the lava viewing area. Due to the unpredictable nature of the lava flow, and potential danger if you approached too closely, the gravel road is blocked off at about the four mile mark and you are directed to an overlook area observing the lava flow into the sea from about a one mile vantage point.

We found a good seat and settled in to enjoy the view. At first all we could see was the white steam rising from where the lava flowed into the ocean. Occasionally, the wind would part the steam clouds and we were able to get a glimpse of a red lava glow. However, once darkness fell, the view got much better as we watched the red glow grow bigger and bigger. While we weren’t close enough to actually see the lava flowing into the ocean, we were able to see the lava itself and it was an awesome sight to behold.

Of course after we were done viewing, we had to bike back to the entrance point. Sure it was dark out, but the rental companies make sure your bike has a flashlight to light the way. Yeah, it wasn’t an easy ride back, but we did it. We got to check off a big item on our Big Island bucket list. Sure, you can book a lava hiking tour and a lava boat tour and get closer to the actual lava, but they are not cheap (one of the top boat tours we looked at was priced at $250 dollars per person, and spent about 20 minutes near the actual sea lava flow). But it was still a lot of fun (and a great workout) to see the lava viewing independently. Just make sure you are prepared for either the multi-mile walk or bike and have plenty of water and sun protection, since there is no shade out there or any sort of facilities. But it was definitely worth the time and effort for the opportunity to see some lava.