Around the midpoint of our Icelandic vacation, we hit Northern Iceland. That meant one day in Akureyri (the second largest town in Iceland- at about 18,000 inhabitants), but we elected to stay two days in the area of Myvatn. On my previous vacation, I had spent a couple days there, and it is a good base to explore some of the surrounding area. So for the first time in about a week, we were at a location where we stayed two nights, and not just the previous one.

I have compared Iceland to New Zealand in the past, and Northern Iceland reinforces that view. This area would almost be like the Rotorua of New Zealand, because of the abundance of volcanic and geothermal activity.

This area is centered around the lake of Myvatn, and surrounding the lake are some small villages with some restaurants and hotels. Apparently it gets crazy crowded in the summer time, which I can believe, but it was not overwhelmed with tourists when we visited (though we didn’t have the place to ourselves like we did in the Westfjords). The drive to Myvatn is about an easy 60-90 minutes with some nice stops along the way. 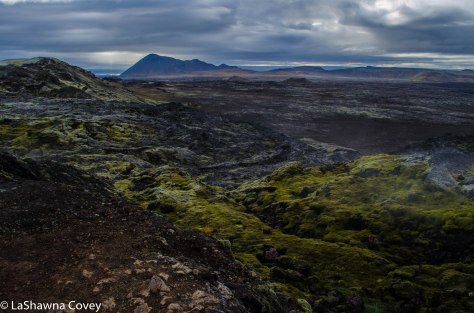 Like most of Iceland, there is an abundance of beautiful nature in the area, and most of it is free, with only about one paid attraction (the Myvatn Nature Baths- think of it as the Blue Lagoon Junior). So really it is just a matter of deciding what you want to see and planning accordingly. 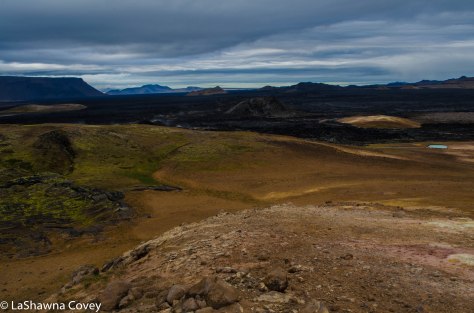 Our first stop was at the lava field of Leirhnjukur. It is located in the Krafla area, which is a geothermal hot spot just off the Ring Road. To get to the lava field, you drive by the Krafla Power Station, which is just one of the many power stations in Iceland constructed to take advantage of the abundance of geothermal energy as a cheap, renewable energy source.

On my first trip, I had tried to get to the lava fields, but the road was blocked past the power station, because it was full of snow. That proved to be a continual problem during my winter trip, because even though roads may be paved and not technically closed, they weren’t plowed for snow or deliberately kept open. So if it happened not to be snowing during your visit, you could probably see what you wanted to see with little difficulty. However, if it was snowing, you were out of luck. Granted that was in 2011, when Iceland wasn’t considered such a hotbed of winter travel activity, so maybe it has changed since then. 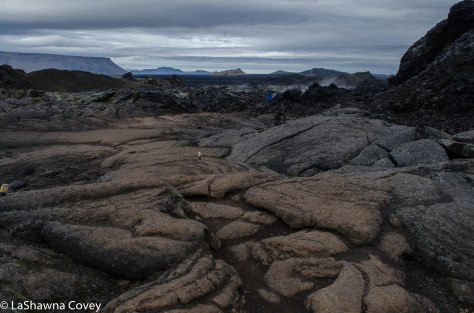 After taking in the nice view overlooking the Krafla area, we figured we would get our daily walk in by an easy hike around Leirhnjukur. This field consists of a crater and lava field that house two major eruptions, one in 1727 and one in 1975, so the lava is still fresh and new and black. 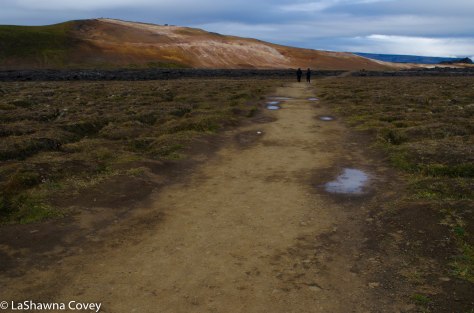 There is a parking lot and a flat, easy trail that will take you out to the field. As you walk through the field, you see the rolling piles of lava, most of which are from the older eruption, so there is moss and other vegetation growing on some of the lava. Off in the distance, we could see a colorful hill (perfects Leirhnjukur?- I never saw an exact label anywhere), and it looked like there were people at the top of this hill. I figured there is no way we would climb that hill, because it looked steep from our perspective, and I still had the exhausting memory of climbing Saxholl Crater fresh in my mind. 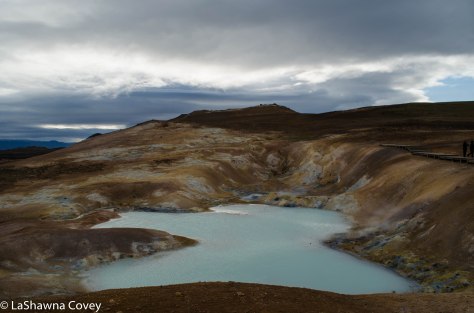 The trail will take you to the base of the hill and around the back. The trail is easy and well maintained initially, where it is either flat and graded, or often times, a boardwalk. The first major site is the large, bubbling mud pit at the base of the hill, and then you are presented with a choice of trails. Neither trail is marked with a destination, but one seems to go off in the distance through the lava field to another crater, while another trail seems to wend its way around the back side of the hill. 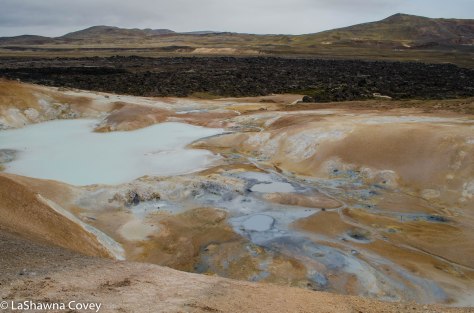 We elected to take the trail around the back side of the hill, and shortly afterwards, the boardwalk disappears, and we were making our way through the lava field. At this point, it ceased to be a flat trail, but it still was pretty easy to negotiate, and the trail was reasonably marked with yellow stakes, so you knew which way to go through the field. Even though we had been in lava fields before, it is still interesting to walk through another one. And it is always interesting to see Earth at its active, because in addition to the bubbling mud pits, there were also a plethora of small vents, expelling warm steam near the path.

We kept going, curious to see where it would all lead, and soon enough we found ourselves very near the top of the hill we thought was so steep earlier. At this point, it was only a short push to the top, so we figured why not? Because the trail ascended so gradually, we really didn’t even feel the ascent, and once at the top, we were greeted with an expansive view of the lava field and the mountain ranges off in the distance. It was quite a beautiful site to behold, even if the weather was cloudy (though thankfully not rainy).

At this point, we could have taken another trail that goes down the hill and makes a loop around the hill to meet up with the main trail. However, we chose to backtrack back to the mud pit and try the other trail. We walked out to the crater to get a better look at it, but didn’t stay too long, because it seemed like more of the same type of lava field. At this point, we had been at Leirhnjukur for a couple hours, and we still had plenty more sites to see before night fell. 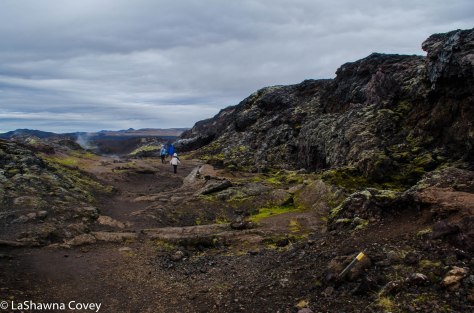 Reaching Leirhnjukur is super easy, as it accessed through a paved road (marked “Krafla”) off the Ring Road 1, and you just follow the road past the power station, up the hill and the parking lot is off to the left. If you have never walked through lava fields, it is an eye opening experience to see how the Earth can be made. But even if you have seen lava fields in other places, the Icelandic lava fields are still worth your time, if only for the beautiful nature views (without any sort of restrictions, beyond well marked paths and signs urging you to stay on the path), and the rash of wild colors.