After spending more than a week enjoying a lot of the pleasures of Western and Northern Iceland, it was finally time to make our way down to the final leg of our trip, which was in South Iceland. That meant one very LONG day of driving, because we were starting our day in Myvatn and finishing it up at our hotel in the central part of South Iceland. 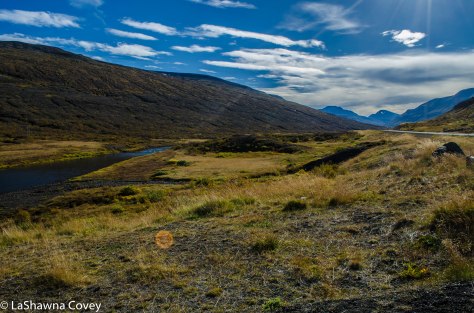 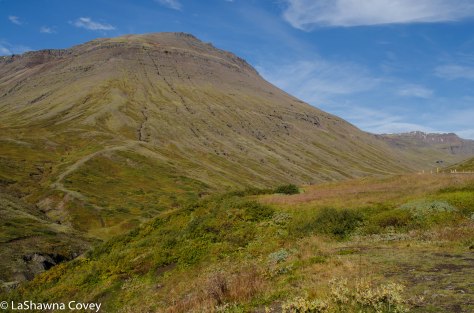 This was our longest stretch of driving in a day, not necessarily in number of hours on the road, but rather the number of kilometers driven. We logged over 400 kilometers in our car, but thankfully 99% of the drive was on fully paved roads. Driving this long leg is not the most ideal, but I considered it rather necessary. Sure there are plenty of things to see and do among the fjords in Eastern Iceland, but we just didn’t have time to fit those things in along with everything else we wanted to see in two weeks. Hence, the very long day of driving to set us up for the final days of our trip.

This is not the first time I made this drive, since I did the same amount of driving on my first trip to Iceland. That one was during the winter, and I ran into the same issues you can expect when driving on ice and snow. For reasons, I can’t quite figure out, once you get to the town of Egilsstadir, the main road splits. Sure that is understandable, because one takes you almost directly east to the coast, and the other one splits down and goes further south. What is odd is that only one of those roads is fully paved, and it’s not the one you think. No, it’s not the Ring Road 1, which is Iceland’s main highway that circumvents the island, but rather Routes 92 and 96. Sure, Ring Road 1 does continue south, but a good chunk of this portion of the road isn’t fully paved and it’s not even easily accessible during winter months if there is snow and ice on the road. 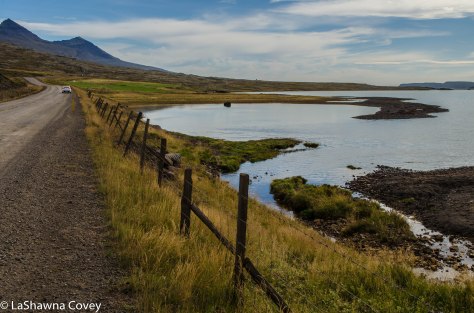 I learned this point the hard way on my first trip. I tried to take a “shortcut” that would have cut my driving time significantly, but it was so laden with ice, that I had to turn around on a narrow road. I kept envisioning that I was going to slide off the road into the ditch and be stuck there for a very long time before help comes along (I had encountered that situation earlier on my trip in another part of Iceland), but thankfully I had made it back to the paved road. 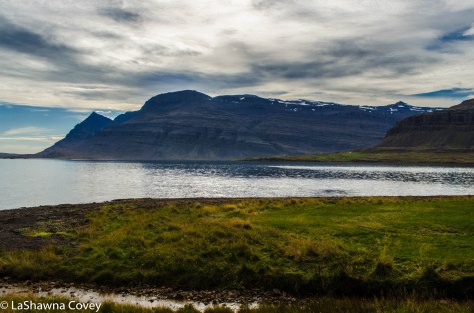 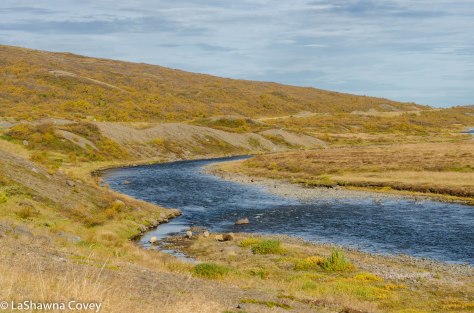 Even though the weather was clear on our second visit, I was completely over driving on gravel road and would rather take a little bit extra time to drive on paved roads. The drive east from Egilsstadir to the coast, is one of the most beautiful stretches of road I drove in Iceland. The road wound around the hills as we descended from the heights of northern Iceland to near sea level of eastern Iceland. The hills rose steeply around us, and we passed numerous beautiful waterfalls, easily viewed from the road. We stopped when we could, but I wish this road had more pullouts to stop to gawk and take photos.

Once we hit eastern Iceland, the road followed the geography of the fjords, so we didn’t have too much to do, but just enjoy the scenery around us, and make occasional stops, such as an outdoor art exhibit of numerous stone sculptures in the shape of eggs of Iceland native birds. This exhibit is called Eggin i Gledivik, and makes for a short diversion. It’s a pretty exhibit in a pretty area, and is a good chance to stretch your legs from the long bouts of driving (at least it was for us).

There is so much to see and do in South Iceland, that you will need at least a few days if you want to see most of it at a leisurely pace. It is also here when you know you have linked back up with the Iceland tourist blob. Sure there are tourists in other parts of Iceland, but the vast majority of tourists don’t venture too far outside of the Reykjavik tourist radius. That radius does extend as far south and east as Jokulsarlon (a site I’ll cover in my next blog post), and the closer you get to Reykjavik, the more tour busses and more crowds you will see. The difference is stark and very noticeable. While beautiful, this is not part of Iceland you go if you want to enjoy splendid isolation (that’s what the Westfjords are for).

The farthest south you will see most daytrippers from Reykjavik is the town of Vik, which is on the western side of south Iceland. Among the numerous natural pleasures in the area or within short driving distance (which I will cover in future blog posts), one of the nicest (and therefore most popular) are the sites of Dyrholaey and Reynisfjara. They are two distinct areas, but you can see one from the other.

The first place we stopped was Dyrholaey, which is a beautiful rock formation, sea arch, and black sand beach. During nesting season, it is also home to a variety of birds (we visited out of bird nesting season). One of the viewpoints at Dyrholaey overlooks the western side of Reynisfjara black sand beach. From this viewpoint, you can see the sea stacks of Reynisdrangur. However, what captured my eye was the freshwater river that originated somewhere farther inland, most likely from one of the many, many glaciers in the area that flowed into the sea. I wanted to get close to it and see it for myself, but there is no easy way to walk down to the beach from the viewpoint. 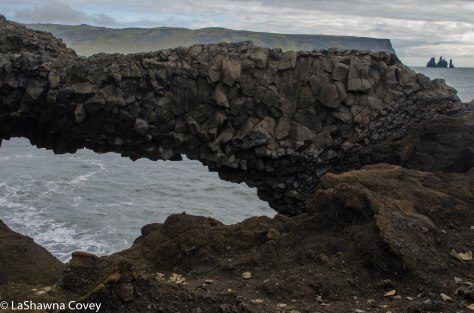 At another vantage point, you can also see the sea arch off in the distance and a beautiful black sand beach down below. I remember this beach from my winter trip, because at the time I visited, it was covered in pure, virgin snow (except for a step of footprints), and I was entranced with the contrast between the pure white of the snow and the pure black of the sand. This time however, we weren’t supposed to go down to the beach, because it was closed.

After that, we drove a short ways down the road to Reynisfjara. While Dyrholaey is popular with tourists, Reynisfjara is another thing altogether. Hordes of tourist buses regularly show up and discharge their passengers for a short walk around the beach with a chance to look at a basalt sea cave, and a closer look at the sea stacks.

It is a very beautiful site, but as you see from the warning signs before you walk onto the beach, and what is apparent from just observing the beach for a few minutes, it can also be a very dangerous beach. This beach is notorious for sneaker waves, which are very powerful waves that can easily knock someone down or pull them out to sea. The occasional tourist death happens at this beach when people don’t respect the power of the ocean. The ocean is not placid at this beach, but rather filled with reasonably large, powerful swells, along with some powerful ocean currents.

This beach is also a good reminder that while Iceland has many, many beautiful beaches, this country is not what you would consider a “beach destination.” I mean beach destination in the sense that you would want to hang out on the beach all day and frolic in the water, even on beaches where the sea doesn’t rage as much. The ocean is simply too cold to swim or play in at all, even in the summertime (it doesn’t get that hot in Iceland in the summer). So beaches here are great to visit and enjoy the seascapes and beautiful nature, but not to play in the water. 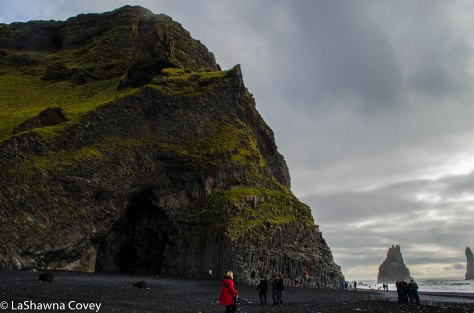 From the entrance point to Reynisfjara from the parking lot, we could see the cliffs of Dyrholaey off in the distance, and it didn’t look TOO far away (though it proved to be around a couple miles). So we just started ambling down the beach, first to get away from the hordes of tourists mucking up the background of our photos, and then later just to see how far we could get. I was hoping to get close to the glacier river I saw at the Dyrholaey viewpoint, and eventually we found ourselves at the banks of that river. After taking in the view, we turned around and made our long way back to the parking lot.

There are so many beautiful things to see and do in South Iceland, that I can’t do it proper justice in one blog post, but I have a few others coming up that highlight all there is to see and do in the area. Even though you do see daytrippers coming down on a tourist bus, that way is simply too superficial to really see everything. I would highly recommend you rent a car and see this area at your own pace. Just know that you will be one of many, many tourists taking it all in.