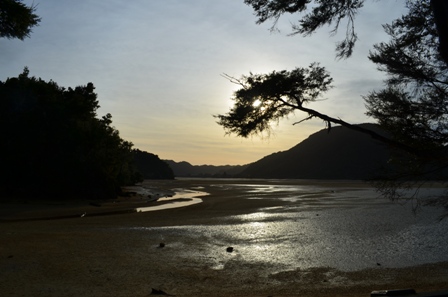 You guessed it: I started early this morning, but this time it was required. Right in front of Awaroa Hut is Awaroa Inlet, and it MUST be crossed. There is no all tidal track alternative like every other part of the track, so it must be crossed two hours on either side of low tide. In this case, low tide was around 0630. So when I woke up early, for the first time, I wasn’t alone. 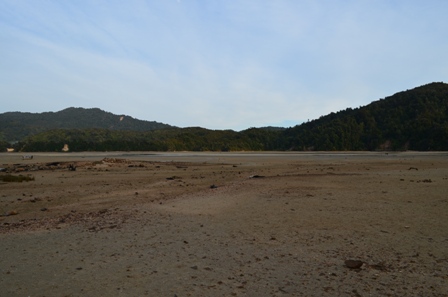 This crossing will get your feet wet, so I initially decided to cross in my beach shoes. However that quickly proved untenable, because my shoes became filled with rocks and shells. It was less painful to cross barefoot, though I had to be careful where I put my feet. Fording shallow tidal rivers was easy, but I didn’t enjoy the rocks and shells underneath my feet. My feet are rather sensitive to pain, which is a bit surprising considering how hideous they can look if they haven’t been exfoliated in a while.

It took about 20 minutes to cross the inlet. Once across, I donned my hiking boots for the final six kilometers to Totaranui Beach, which was the final end spot for me. You can add another day of hiking out to Wainui Bay, but I elected not to when I realized that getting transportation out of that site was rather difficult. Most of the hike was again in lush coastal forests and up hills and down hills. Occasionally a sea view would emerge and then the final beach trek at Waiharakeke Beach.

Knowing only 30 minutes of walking remained made the very last series of steep switchbacks easier to bear. The final look out was at Skinner Point, and I could overlook the promised land- or at least my final destination of Totaranui Beach.

10 minutes later, I gratefully dropped my pack in the shade of trees as I finished and arrived at the beach. It was four days and 38 kilometers of beautiful coast walk. There are busses and water taxis for the return journey, but I elected for the bus, because it would take me back to Nelson in less time and less money than it would have cost me to take a water taxi back to Marahau and then a bus back to Nelson. The only thing that stood between me and a refreshing shower (which I needed very much) was a three hour bus ride back to my hostel. But I did it. I completed my first multi day hike and I was ready for more. 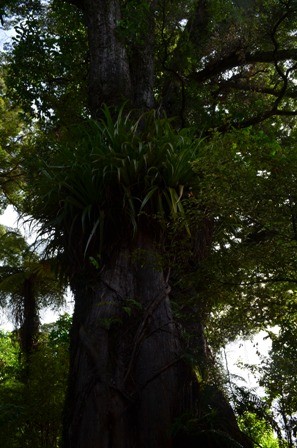 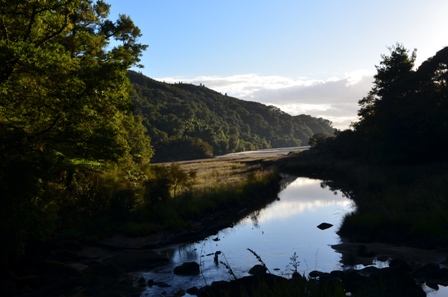 I started early again the third day, not because I had to meet some tidal timeline, but just because I woke up early and had nothing else to do. I would rather complete my daily hike early and relax at the hut rather than start late. Plus again, starting early means the weather is still cool and I have most of the track to myself. 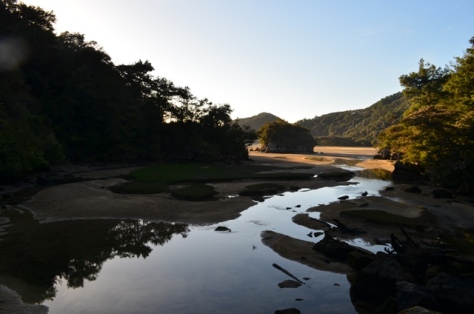 The tracks went up hills and down hills in the forest, and I don’t know if the hills were steeper that day, but I was definitely feeling it more. My daily walk was 11.5 kilometers and it took me about four hours. Finally, the track turned to actual beach walking for part of the way. There was a 1 kilometer stretch along Onetahuti Beach, and the last 20 minutes along Awaroa Inlet to the hut. 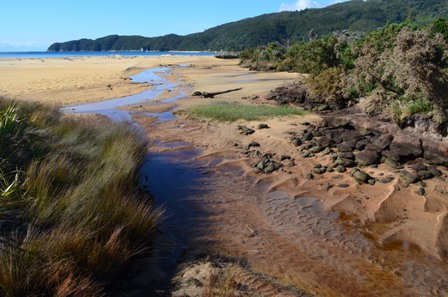 I was the first one to arrive at the hut again, and this hut had the water right in its front yard. However, this hut only had the big open bunks with seven mattresses side by side. But at least I was able to stake out a wall to myself, so I was only sleeping next to one stranger, rather than two. I relaxed with lunch and a nap, and I was still on my own during early afternoon.

Awaroa Hut is right on the edge of Awaroa Inlet, and it was here that the tidal differences in Abel Tasman National Park are the most starkly evident. At high tide, the entire beach is covered in water and most of the path along the beach was under water. However, at low tide, you could walk across the entire inlet (though your feet will still get wet, because the inlet is never entirely free of water). 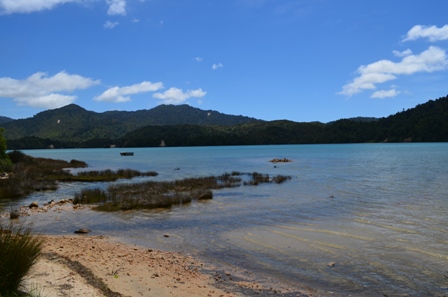 It was also fascinating how much the wind affected the temperatures. It was sunny and warm all mornings, but the previous two days were a bit cloudy, and rainy at times, and substantially cooler. Like need a fleece jacket cooler. And unless it was sunny all day, the water was too cool to swim in (for me anyway).

Because I had the entire rest of the day to myself, I decided to make my way to Awaroa Lodge. It was only a 20 minute walk from the hut to the lodge, but it required me to cross the Venture Creek tidal flat, which could only crossed three hours on each side of low tide, unless you wanted to swim across that is.

Over there is a HUGE, soft white sand crescent-shaped beach, which was in stark contrast to the nonexistent beach in front of the hut. The water was still too cold for me, but I just sat on the beach in the warm sun listening to the soothing sounds of the wind and the waves as I took in the gorgeous scene around me.

I capped off the day with an absolutely delicious dinner and wine at the Awaroa Lodge. When I heard that the lodge served actual meals, I knew I couldn’t pass up the opportunity to eat a real, cooked meal. I had eaten trail food for the previous three days. I elected not to bring a stove, so everything I ate was cold and didn’t require cooking.  So I treated myself to a fantastic cup of sea chowder and bacon-wrapped chicken with cranberry stuffing. It was like ambrosia to the tongue and I savored every bit.