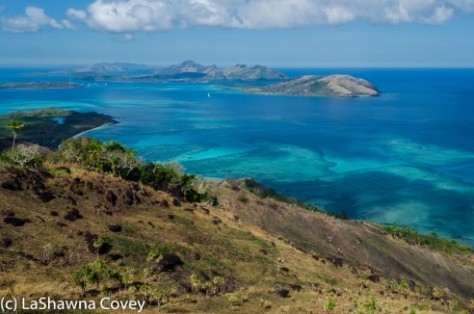 Even though it was tempting to just lay by the beach in a hammock or cool off by snorkeling, I did take advantage of my time on Nacula Island to do some hiking. This island (and I think most of the smaller islands) didn’t really have much in the way of roads, so there were no cars to worry about. People got around by boat or by walking. I decided to check out two different parts of the island by hiking to them.

The first hike I did was a basically flat hike out to the south eastern part of the island. This hike only took me about a leisurely 30 minutes (maybe more) to get to my final destination of the beach by Nabua Lodge. This hike wasn’t marked with specific trail signs, but I did have a map from the Blue Lagoon Resort that showed me the basic way from the resort to the mud flats on the southern coast. Navigating was basically following the largest trail and hoping I was right (I was). Even though the trail was flat, it was definitely muddy in parts, but there were large branches to help me traverse the deeper muddier area.

The trail emerges onto the mud flats, and with the tide out, the beach was huge with some local natives hunting for shellfish in the mud. After that the “trail” was basically just walking along the shoreline. There were some very beautiful reddish-purplish rocks on the beach, rocks that I had never seen before.

Since it was rather hot and sunny on the day I went hiking, I didn’t start off until the later afternoon, hoping it would cool off a bit. So, I was mindful of both the incoming tide and the setting sun, because I did not want to get caught out on the island at night. Sure it wasn’t dangerous or anything, but I didn’t have a flashlight with me, nor are any of the trails lit up. Fumbling around in the dark is not my idea of a good time. 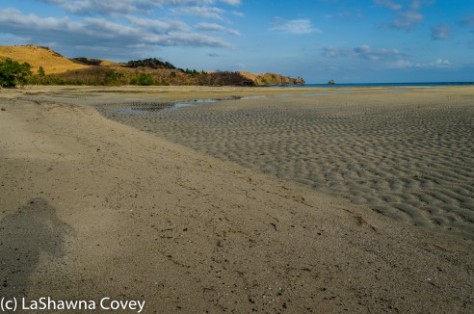 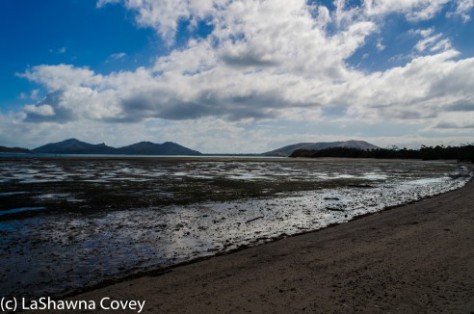 Once I rounded the beach point, I came upon a relatively wide sandy beach. It certainly wasn’t as wide, or as nice as the beach fronting the Blue Lagoon Resort, but it is home to a couple other more budget lodges. It is also home to the Traveller’s Tea House. I had read about that place in my guidebook, and one of the other reasons I timed my hike when I did was to hit the tea house when it was open (only 3-5 pm in the afternoon) so I could indulge in some local cake. The cake that day was a very tasty chocolate coconut cake made right on site, and it was delicious. So thick, so rich. It just melted in my mouth as I enjoyed the beach view. 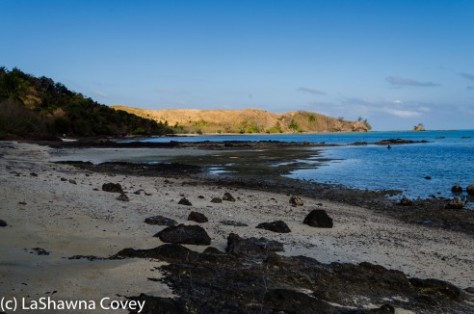 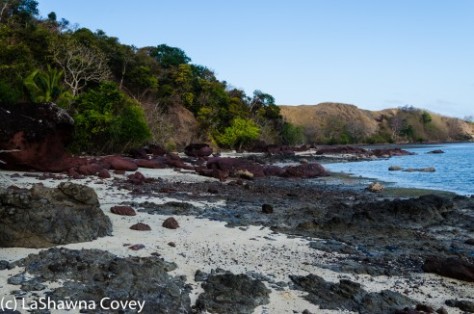 After the cake, I walked a bit farther down the beach to Tadrai Point, which was an open rock sea arch. There really wasn’t much more of note on the other beach around the point, and the sun was getting low on the horizon, so I headed back. 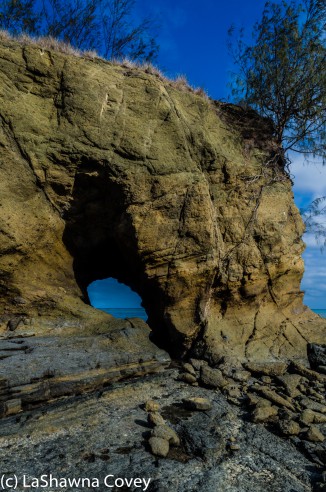 Before heading inland back to resort, I made a quick stop at a mangrove forest right in the mud flats on the beach. 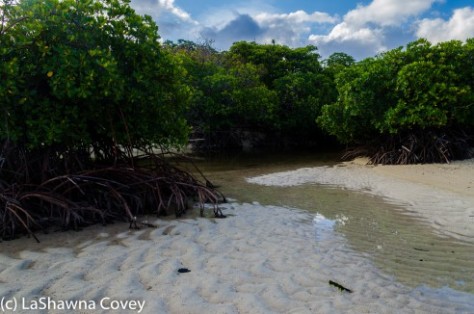 My second hike was to the one of the highest points on the island, where it afforded me a 360 degree view of the entire island. Since this hike would afford me no shade, and I needed enough time to get there, enjoy the view, and get back before I passed out from heat exhaustion, or at least exposed me to a sunburn, I decided to do this hike early in the morning. Not so early that I would miss breakfast (which would be stupid, because it was free and it was a plentiful breakfast buffet), but I started right after, around 0800. 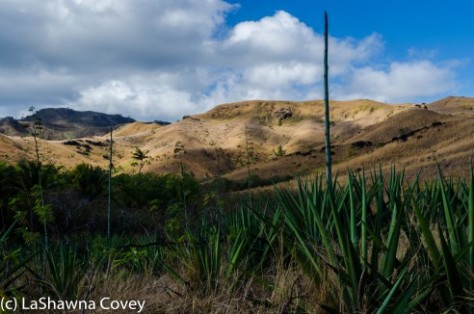 This was another one of those hikes that didn’t have clearly marked signs, but I looked at the map at the resort beforehand, and basically knew where I needed to go. The most confusing part was right after leaving the lodge and guessing which trail I needed to take. Since I knew I needed to head up the hill, I followed the trail that ascended. The trail ascended very quickly, and even though it was early in the morning, and the sun wasn’t fully overhead, I had to stop multiple times to take a breather, drink some water, and look at the view. 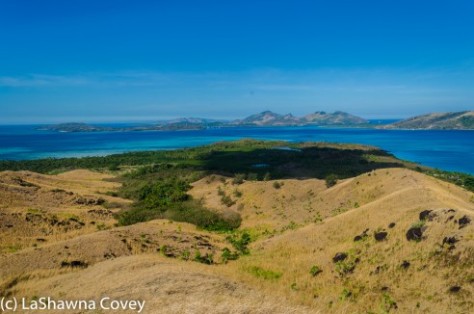 The western side allowed me to look down at the extensive coral reefs and the differing colors of the water, views you simply can’t see when you are at sea level.

After enjoying the views, I headed back down, and not surprisingly, the trip down was much quicker and easier than walking up. All told, this hike took me less than two hours, and that included the number of stops I made to look at the views. It is a moderately easy hike. The hardest part is at the beginning when the trail sharply ascends to the ridgeline. But basically anyone with moderate fitness and wearing some good shoes can do this hike. I would just recommend you do it in the morning before it gets too hot and sunny, and make sure to bring some water with you. You will need it. 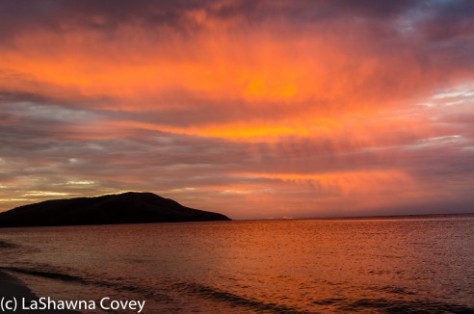 My second stop on my Fijian extravaganza was Nacula Island. I wanted to experience as wide of a variety the country had to offer as possible. So that meant I wanted to visit one of the islands in either the Mamanuca or Yasawa island groups. This one took some research and hard choices to make, because there is such a wealth of opportunities among these small islands. The Mamanuca Islands are much closer to the mainland of Viti Levu, and many of them can actually be visited on a day trip (and many people do). The Yasawa Islands are much more remote, and really can’t be visited on a day trip, at least not one that can make for a full day. 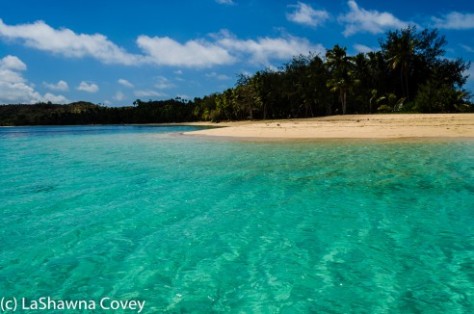 After careful consideration, I chose to stay on Nacula Island. Nacula Island is actually fairly far northwest of Viti Levu. There are islands that are farther north, but don’t offer the wealth of possibilities. Nacula Island is pretty big, with a wide variety of beaches, hikes, and small villages to occupy your time. There are some nice resorts on the island, particularly the one I chose, the Blue Lagoon Resort. This resort has a wider variety of expense options, from the cheaper dorm beds, all the way up to your own beachside bure which fronts Long Beach, a long stretch of sugar white, super soft sand with easy swimming and snorkeling in warm water. In addition to what was offered on-island, the Blue Lagoon Resort also has regular trips up to Sawa-i-Lau Cave, which is this weird and beautiful limestone cave where you can swim in the sea. I really wanted to go there, so which resorts offered that trip played a great deal into my final decision on where to stay.

There are two ways to get up to Nacula Island: sea plane or boat. I took a sea plane out to the island, but to save money I took a boat back. Knowing what I know now, I would just cough up the additional funds for a sea plane back to the mainland. 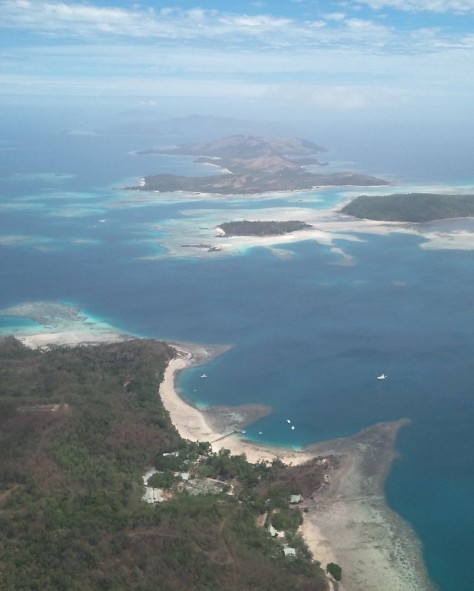 A boat trip out or back takes about half a day (at least) at around five hours minimum. At first, the boat trip was interesting as we stopped at different islands. But after a while, the trip just became repetitive because the islands looked the same from the boat, the sea got rougher, and the boat got more crowded. I was over it by the time we rolled into Viti Levu and was kicking myself for being too cheap to get a sea plane back. A sea plane trip is only about 30 minutes as opposed to five hours and it took me right to Nacula Island and offers a beautiful view over the islands. 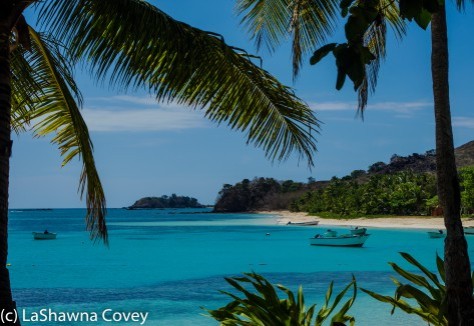 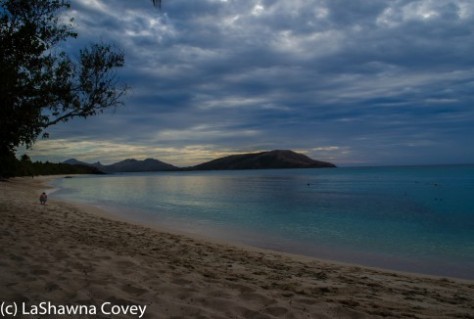 I was out on Nacula Island for about five days, and that is plenty of time to relax and see a wide variety of stuff. One of those mornings was the trip out to Sawa-i-Lau Cave, which was delightful, and thankfully we were the first group to the cave, so it wasn’t that crowded. I also did some hiking (subject to the next blog post), snorkeling and just plain relaxing on the beach. I also took a group trip to one of the local villages, Nacula. It was a small village but it was interesting to see. 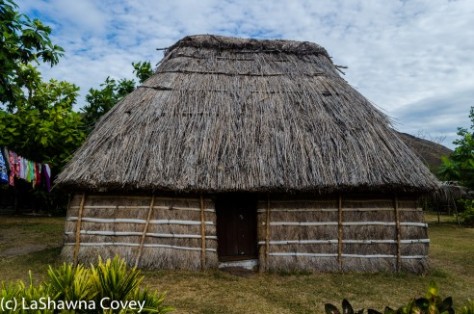 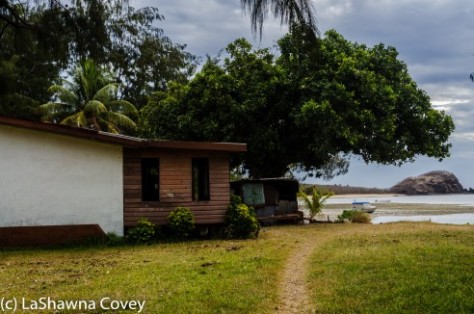 We saw the island-wide school all the different villages sent their children to, that also housed a solar panel electricity set funded by the European Union. 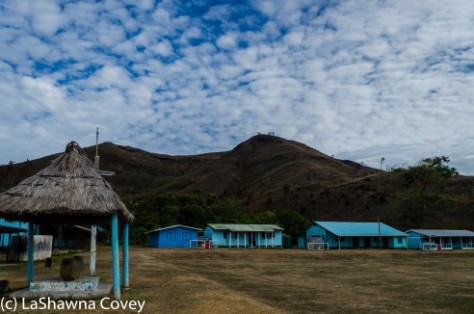 For a small village, there were a couple of churches: both the older Catholic Church and the newer Protestant Church. 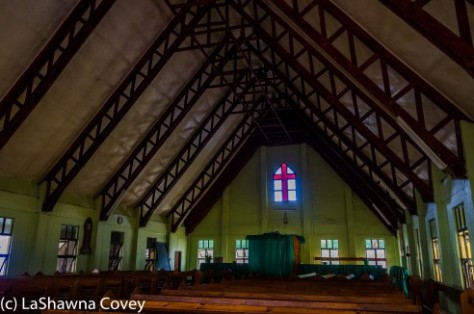 Nacula Island is a good place to kick back and relax and enjoy “Fiji Time.” I spent many hours doing that. My bure opened right onto the beach, and I had my own beachside chairs to relax. The beach itself was very beautiful with soft sand. The snorkeling off the beach was pretty good as well. There was a small coral reef that house a wide variety of colorful fish. It was so easy to just wade into the water at high tide and paddle around a bit looking at the fish. I also took another snorkeling trip through the resort out to another island. This part of Fiji is amazing for snorkeling. The water was warm (not hot like the Caribbean), though winter was just ending so it probably gets warmer in the summer. The water is clear and the colorful fish are plentiful. The seas up in this area are pretty calm, so it is easy to snorkel and you don’t have to fight the ocean currents. Seriously, Nacula Island looks just like you imagine a tropical paradise island could look like.

This island is also a good place to view the sunset since the resort faces to the west. Not every night had a beautiful sunset, of course. In fact, every night looked a bit different depending on the quality of the light and the clouds. My favorite sunset was the one in the title picture. This was my second or third night on the island, since the sunsets had been pretty gray and nearly non-existent up to this point. But this night was amazing. The colors were a mixture of orange, pink and magenta, and they just got brighter as the sun dropped toward the horizon. But the best part was when the sun did drop below the horizon and the whole sky lit up for a couple minutes. It’s like the clouds had a major color explosion and filled the whole sky. It was rather awe-inspiring to behold. 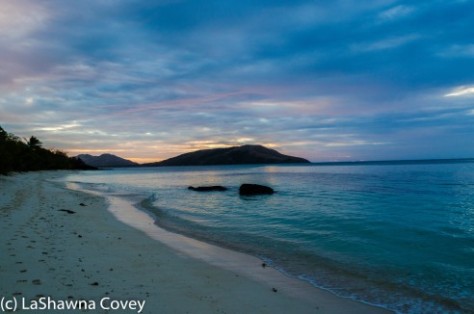 Subsequent sunsets were never quite as spectacular as that one, but they were definitely lovely to look at, with most sunsets taking on a golden yellow tone contrasted beautifully with blue sky and sea. 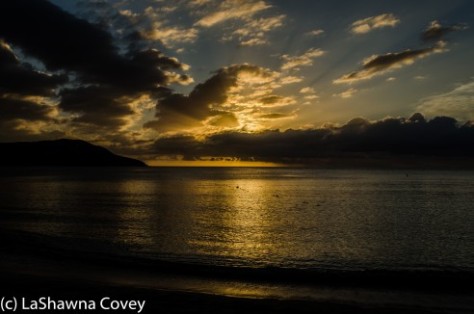 Nacula Island was definitely worth my time, and I would absolutely come back on a second trip. I would just suck it up and pay for a sea plane both ways to save time. Sometimes it is worth it to spend some extra money to maximize your travel time. 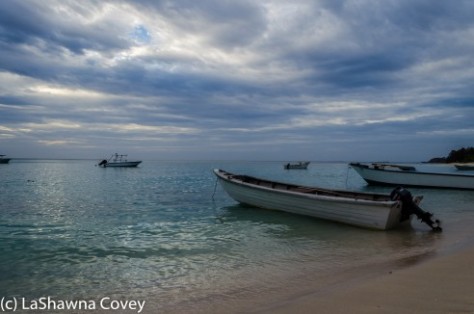