For the past couple of years, Banff National Park in Canada has been on my must see travel list, and due to needing to burn some vacation days, I had the opportunity to visit this past September. For me, September was the perfect time to visit, because the weather is still pretty decent, the crowds are thinning (though they were still pretty strong the middle of September, but by the last week of September, they were just a shadow of their former self), services are still available (though the gondola to Sunshine Meadows shut down a few days before I arrived) and the fall foliage is out, but the snow hasn’t really hit (though it started snowing a day or two after I left, so I timed it right).  Since I had two weeks, I decided to split my time for several days in Banff city, several days at Lake Louise, and a few days up at Jasper National Park. I figured that would give me the greatest diversity of nature views and hiking opportunities in the area. 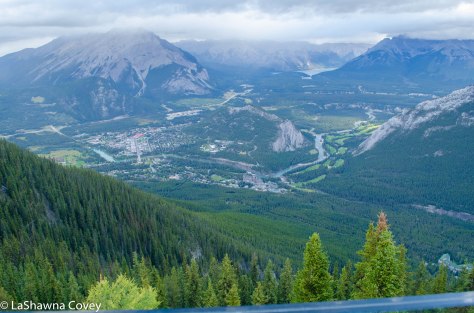 Even though I think Lake Louise has more beauty bang for your buck, there are definitely plenty to see and do in Banff town area itself. I had originally planned on going hiking in the Sunshine Meadows area, because that is considered the premier hiking place in the area, but in my research, I somehow had missed that the Sunshine Gondola shut down a few days before I arrived, and I couldn’t see another way of getting to the summit (I was in no condition to hike the few thousand feet elevation gain to get to the top).

So I pivoted and decided to take the Banff Gondola up to the top of  Sulphur Mountain for an expansive view of Banff town and the surrounding valley. Since my research said that the gondola gets really popular around late morning, I went early morning shortly after it opened and had zero wait and few other tourists to contend with. So for a blissful period of time, I could take in the view in silence (though battling the at times fierce wind at the top) and without having to fight crowds for nice views.

The view from the top was lovely, and even though there were clouds, the view wasn’t socked in, and the clouds added some personality to the photographs. From the summit, you can take a short hike on boardwalks to the weather tower not far away that gives you different views of the area. It is pretty easy to walk, since they want to make it as accessible as possible. Beyond the views and some exhibits, there are also a couple restaurants if you want to eat or snack up there, and overall, it is a good way to pass a couple hours before taking the gondola back down.

If you like waterfalls (I happen to love them), Banff National Park is chock full of them. Most of them are accessible from a reasonable hike, but one waterfall in town is just right along the main river and easily accessible. Bow Falls isn’t a large falls (the drop is only about 30 feet), but it is a wide, pretty falls, and there are a couple of nice viewpoints to take in the falls.

The first viewpoint I went to was on the west bank. It has a large parking lot, easy for accommodating tour buses (there were a couple when I first arrived, but they were gone shortly after). Right from the bank, you have a nice view of the falls, and a short, kind of steep hike up some stairs will take you to an even better viewpoint that overlooks the falls.

The west bank viewpoint alone is good, but if you want a different perspective, you can drive to the east bank viewpoint at Surprise Corner. This viewpoint has a smaller parking lot, but you cross the road and head to the top of a small hill for an expansive view of Bow River, Bow Falls, the surrounding hills, and a very photogenic view of the famous Fairmont Banff Springs hotel (that looks like an old castle). 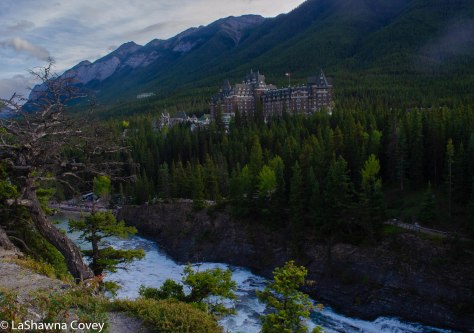 Another beautiful area worth your time is the Vermilion Lakes which are within walking distance from the town, or you can drive them. I visited them twice, once at the beginning of my tour, and once at the end. The first time I visited, it was on my first full day of Banff, and I visited them as an aside while doing the Fendland Trail hike. I started from the train station and walked to the trailhead, which was only about 400 meters away.

The nice thing about the Banff area, is that is possible to walk most places. The Fenland trail was super easy and flat. It winds its way through the forest and alongside a river, and it was one of the best and easiest places to watch elk feeding. I happened upon a couple female elk feeding in the forest and was able to see them from a safe distance, and in the parking lot, there were more than one elk feeding, and attracting crowds of photographers. I knew wildlife viewing was possible in the area (and it wouldn’t be my only time seeing wildlife), but it is still sort of trippy to see these huge animals feeding close by.

The trail to go the Vermilion Lakes is an offshoot from this trail, and the “trail” itself is not a trail but rather a road. So you can walk along the road, or choose to bike, or drive. The first time I walked, and I made it to the first two lakes. Part of it was I wasn’t sure how many lakes there were or if the road was a throughway. I had checked on a map, but it wasn’t the best map. So, not knowing everything, I decided to turn back after the first two lakes, but I certainly got to enjoy a gorgeous view.

The road is flat and easy to walk, though at times, I felt the cars weren’t as considerate as they could be to people walking alongside the road. The lakes are a series of small lakes, some of which seemed to be connected by creeks. They are set within a peaceful wetland area, with a nice backdrop of mountains. I read how gorgeous they are at sunsets, which I imagine, but of course, it would still require a colorful sunset, which was a rarer commodity when I visited, because most days were rather cloudy.

At each lake, there are some benches to sit and contemplate the beauty in front of you, and there was an unhurried quality to my visit. Because I was just getting my body used to hiking multiple miles every day- and coupled with being unsure how far the Vermilion Lakes went- meant that I turned back after the second lake, but I knew I had to come back and visit. Due to travel requirements and such, I decided to come back to Banff town and spend the night on my last night in Canada (to make it an easier drive to the airport), so I resolved to stop once again at the Vermilion Lakes, but this time drive the road, and see if there was anything I missed on my first visit. And there definitely was. 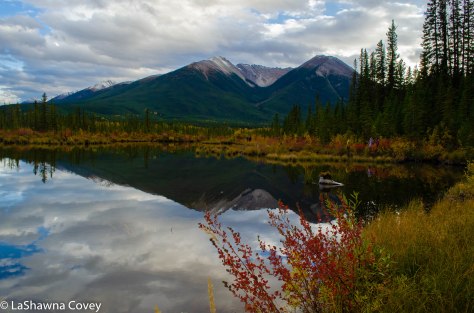 First off, even though it had only been a week and a half since I visited, the fall foliage was very noticeable (all around the area, not just here), and the marsh was now awash in  reds, oranges, and yellows. And since I visiting closer to sunset on a nice day, the colors of the sunset just added to the soft autumn tones of the scenes.

There are actually two more lakes past the second one, though there is a gap between the two sets, which is more noticeable if you are walking (hence why I turned back the first visit). Plus the road ends in a turnaround at the last lake (though the bike path continues further if you were biking the trail), so there is no doubt you have reached the last lake.

I was just taken aback by the colors and the beautiful scenery and didn’t want to leave. In fact, it was more of a challenge to maximize the waning daylight and see the two lakes I hadn’t visited before (which in my opinion were a bit prettier than the first two- if I was forced to rank them), and not spend too much time at one and miss the other. 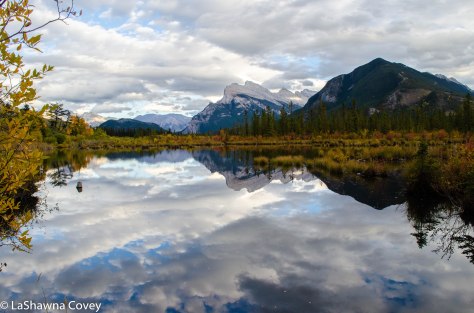 If you are in the town of Banff, it is so easy to stop at the Vermilion Lakes, that there is really no excuse not to, especially if you love gorgeous, colorful nature that is also peaceful and contemplative.