Mid vacation, I made an adjustment to my itinerary when I decided only to do one Lake Louise hike and not two, so I was left wondering what to do with my free day. After some consideration, I decided to take a day trip out to Athabasca Glacier. It is a large glacier (though receding) as part of the Columbia Icefield, and the trip takes you out to walk on part of the glacier and then to a viewpoint overlooking the valley. I did some hemming about this, because the glacier is a stop along the Icefield Parkway, which I knew I was going to be driving in a few days’ time. But a visit out to the glacier (as opposed to just looking at it) and the viewpoint are really only available through a tour. It doesn’t have to be a formal tour bus tour from another city, and you can make arrangements at the glacier visitor’s center. I decided to do a tour to give me a break from driving, so I could focus on the sights around me, and the glacier and viewpoint tour (and lunch, always a plus) were included. 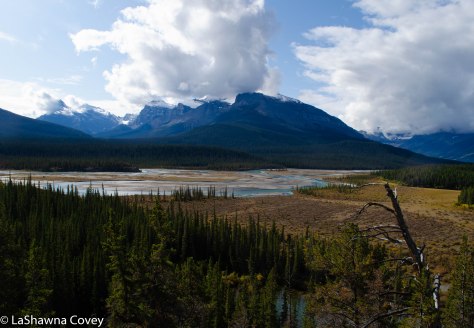 It’s a full day tour starting in the morning pickup at Lake Louise with some stops along the Icefields Parkway for views, such as Bow Lake and Howse Pass. This was my first look at the amazing scenery along the Icefields Parkway and gave me a preview of what I was going to see and what other stops I’d want to make on my own. The weather was pretty good that day, and it was another sunny day that showed off the mountains and surrounding countryside in the best light. Everywhere I looked, the natural beauty was just awe-inspiring.

The visitor center is called Columbia Icefield Centre is large and packed with people, especially midday. It seems to cater more toward the large tourist groups like mine, though you could come as an independent traveler and join one of their tours to the glacier. If you want to visit during high season, it would probably be best to go with a tour group, or at least buy your ticket in advance. The centre is only open from May to October, though the summer months are the most popular.

The view of the glacier is pretty good from the visitor center, though obviously it is a more distant view. To get a closer look, you can either park across the road and walk up to the edge of the glacier via some walking trails, or to get an even better view (though obviously you have to pay for it) take the tour that takes you out to the glacier to walk on. 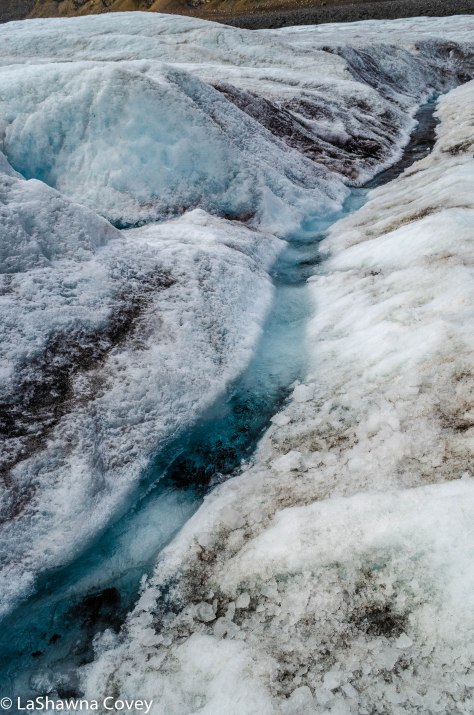 After the trip back from the glacier, you make another stop at a specially constructed viewpoint over the valley. It is called the Glacier Skywalk, which is just a tad misleading, because it is not near the glacier, and you can’t even see it from the viewpoint, since it is further along the valley. 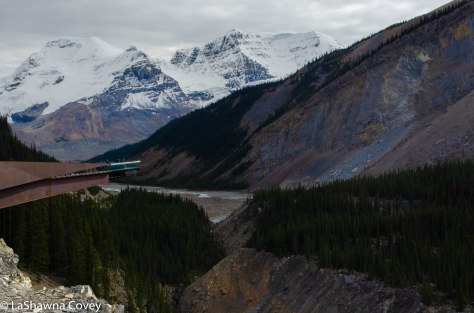 But the view itself is worth it. It’s a little unnerving walking out on the skywalk, because it is one of those massive structures that jut over open air with clear plastic for floors (like the skywalk at the Grand Canyon). You know it’s safe, but I did keep wondering what was the maximum capacity of people allowed on the skywalk at any one time. It wasn’t crowded or anything by that point, since we were later in the afternoon, but it was a bit windy, which rocked the skywalk a bit.

I was entranced by the view, because it was over a tree lined valley and I could see numerous waterfalls dot the valley, and flow into the river. The walkway is suspended over the Sunwapta River and the surrounding Mt. Kitchener. 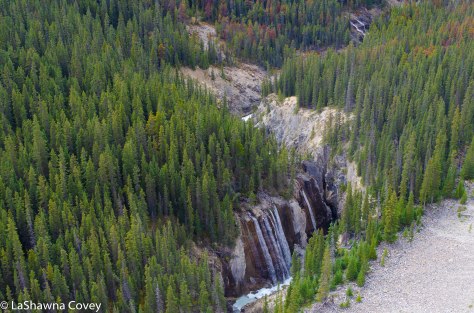 Overall it was a nice way to spend the day. It is certainly not a cheap way to spend the day, because a day long tour in the Banff area is not cheap. If you want to see the same sights, but save some money, I recommend starting a tour directly from the visitor’s center, and buy your tickets in advance during high tourist season. 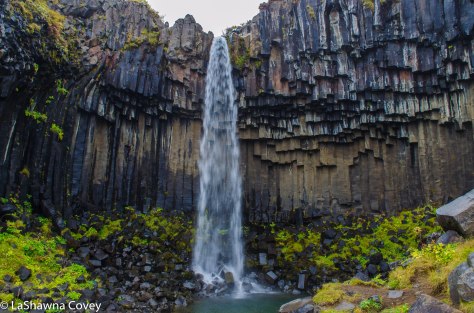 As I’ve talked about in previous blog posts, South Iceland is just filled with beautiful nature of an incredibly diverse sort. It is quite amazing that for an area that really isn’t that big, you can find nearly so many different ecosystems .

The park itself is rather big, but for most day trippers, the bulk of the sites are within a couple miles walk of the visitor’s center. The two biggest attractions for visitors are Svartifoss and Skaftafellsjokull. Both of them are reached by well-maintained trails with under an hour of walking, but there are also more longer, more difficult trails for those who want to venture deeper into the park. 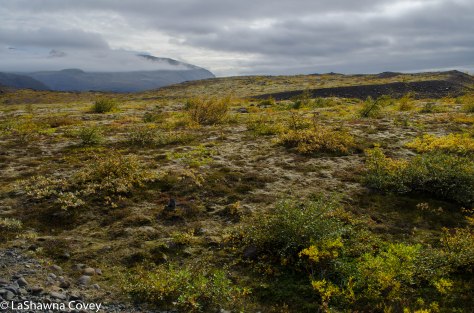 I knew Skaftafell National Park is a very popular destination, with some estimates of 500,000 visitors per year, making it one of the top attractions in the country. So even though we were visiting during the shoulder season, and not high tourist season, I wanted to get to the park early so we could beat a large part of the crowds. 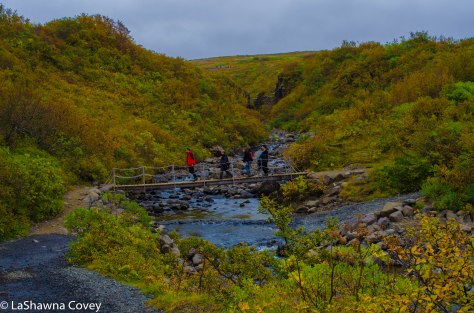 Skaftafell National Park is easily reached off Ring Road 1, with a well marked sign. Like all of the other national parks and attractions in Iceland, admission to the park is free. That is one of the very nice things about visiting Iceland. I am so used to America charging admission to a good number of their parks and other beautiful nature sights. However, there is one thing about Skaftafell that is uncommon in the rest of the country: they charge for parking. I only encountered this in two different sights in Iceland: Skaftafell National Park and Selijalandsfoss. Having gotten so used to everything being free, this took me aback a bit. But the parking charge is about six dollars for 24 hours. And considering how this park is probably feeling the weight of the tourist crush, I can’t say I blame them for charging for parking.

Since we got there early, the parking lot wasn’t too full, and there weren’t that many tour buses. After a brief overview of our two planned trails at the visitor center map, we set off to see Svartifoss first. I knew that was the MOST popular sight, so I wanted to see it before the crowds set off. Shortly after we set off on our 1.8 kilometer hike to the waterfall, I realized we had been had by my guide book. My guide book had designated the trail as “easy”, so I figured the trail would be mostly flat and well maintained. Well…I got half of that right. The trail is very well maintained, with most of it cement, and the a good chunk of any uneven ground is covered in plastic coverings. But flat? That’s a laugh. The trail is nearly all uphill for the route to the waterfall. And when I mean uphill, I’m not talking a gentle incline, but rather steep in more than one part. It was quite the puffer at times, and I took advantage of the some of viewpoints of other waterfalls, or viewpoints of the surrounding countryside, to catch my breath.

Eventually, we saw a nice waterfall off in the distance, and wondered if that was Svartifoss. Even though it had basalt columns like was described in my guide book, I dismissed it initially, because the waterfall looked too small to be a large tourist attraction. But once we got closer to the waterfall, I could see that yes, in fact it was Svartifoss, but thankfully it looked more majestic up close. You can view the waterfall from a bit of a distance at the bridge that crosses the river, or you can take a short trail to the base of the waterfall for a very nice view.

The waterfall looks really nice up close and personal, and the basalt columns are interesting to look at, with the combination of basalt vertical columns and hexagons, formed by differing sorts of volcanic activity. 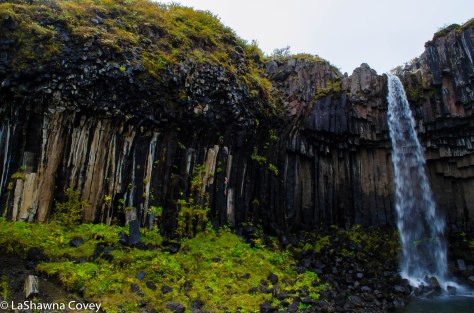 After admiring the waterfall for a bit, we continued on up the trail out of the valley. You can turn back and take the trail down the way you came up, though it really isn’t encouraged. Due to the large volume of tourists, the park requests you take another trail back, so as to control the flow of people traffic. The trail back was nice. It wasn’t anything overwhelmingly beautiful, but it provided some nice views of the surrounding countryside. We could also see the hordes of tourists making their way up the hill to visit the falls and we were glad to miss the tourist crush. Even more so, when we got back to the visitor center and saw the lines of buses parked in the lot.

For our next hike, we walked out to Skaftafellsjokull, which is a glacier within the bounds of the national park. My guide book promised an easy 1.8 kilometer walk to the glacier, and this time, they were right on the money. The trail is flat and you can see the glacier off in the distance when you start, growing bigger as you approach it.

This glacier is like a junior version of Fjallsarlon. The glacier is not that big, and like he rest of Iceland’s glaciers, it is retreating, and leaving behind a growing glacier lagoon in its wake. Due to the deep looking, fast moving glacier river that comes from the glacier, you can’t just walk up to the glacier, but rather view it from a short distance. It’s not the most impressive glacier in South Iceland, but it is still nice to stop and marvel at the sheer accessibility of Iceland’s glaciers, a fact that is liable to change in the coming years through glacier retreat due to climate change.

Even though I had budgeted the entire day for Skaftafell, it took really only about a half a day. So we headed back to the hotel to relax in our nice, warm hotel room and plan for further adventures. Skaftafell is super easy to reach in South Iceland. Just know that is a popular tourist attraction, so plan accordingly.