One of the frustrating things when on a hiking vacation is being subject to the vagaries of the weather. Sure I can game it as best as possible by scheduling a vacation during the best weather window, but that also tends to correspond with the window of high tourist season (for obvious reasons). When going off season or even in shoulder seasons, the weather is much more variable. So all I can do is hope that the weather will be good ENOUGH on the day I plan my activities.

For a good chunk of my Banff vacation, the weather was on the cloudy and occasionally rainy side. For the most part, that didn’t really throw off my vacation plans, since I just rolled with it, and was glad the weather wasn’t worse. But as much as I love rain in my normal life, I do like my vacations to be rain free as much as possible.

The weather the day of my Maligne Canyon hike was decent enough. It was on the chillier side and cloudy, but the rain wasn’t really a factor. When planning this hike, it was a matter of where I wanted to start, since there are many possibilities, depending on how far I wanted to hike, and what I wanted to see.

I decided to start at the Sixth Bridge, which was the farthest trailhead out, and then hike up the canyon to the First Bridge. That would make my trail start flat and level along the Maligne River, and then gradually ascend through the canyon, passing the different bridges, and a series of waterfalls. It also meant that when I was hiking downhill on the return hike, which is always preferable for me than hiking uphill.

Like usual, even though I started my hike early, I wasn’t the only car in the parking lot, though there were less than a handful at that hour. I crossed the Sixth Bridge immediately and started the hike. It’s a pleasant, flat hike along the river, with the trail sometimes paralleling the rushing river, and sometimes veering more into the forest. But always the path would lead along the river.

Parts of the trail were soaked in water from the underground springs bubbling into the river, but there were always blocks, logs or stones to carefully make my way and keep my feet dry. The trail is signed when it needed to be, though I made a bit of a mistake once I hit the sign for the Fifth Bridge, which is another trailhead. I assumed that we would have to hike over every bridge on the trail, but quickly realized that it was just another trailhead and turned around. I should have not followed the sign for the Fifth Bridge, which lead to the trailhead, but rather the signs to the Third Bridge.

The trail starts climbing immediately after the sign, and follows the top of the canyon. The ascent widened my view and gave a good photo op of the Fifth Bridge. The initial part of the hike from the Fifth Bridge has a pretty, but not astounding view, as it is a high view of the canyon and the river. For some reason, the trail is not flat and level at this point, but rather heavily slanted by the rock, which made it a bit of a challenge to walk. Soon enough the trail drops down much closer to the river, and there are even some side trails that go right to the river’s edge, though I needed to be cautious, because the rocks can be slippery, and the river is full of churning rapids. 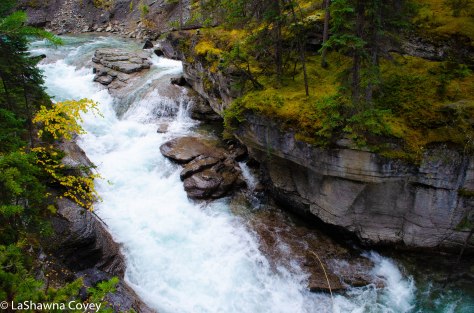 The stretch of trail from this point to the Third Bridge is probably the most scenic of the trail. The trail follows the contours of the canyon, so sometimes it rises a bit above, but then drops down to be closer to the river. I loved the close views of the river and the verdant green, narrow canyon. The rapids are scenic, and the waterfalls plentiful, though you are much more likely to get wet from the water spray. 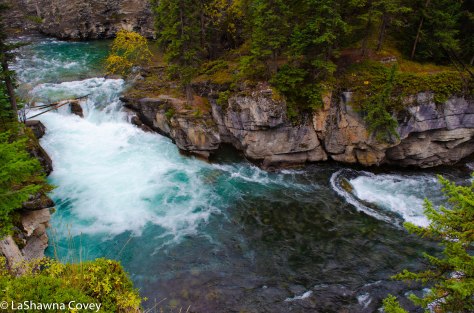 Unlike the Fifth and Sixth Bridge, the Fourth Bridge doesn’t lead to a trailhead, but rather just a bridge over the river that provides nice views, but ultimately doesn’t go anywhere. The Third Bridge brought me from one side of the canyon to the other, as the trail continued up to the main parking lot. The waterfall at the Third Bridge is the most towering and beautiful, though any photos taken are better from a nearby viewpoint than from the bridge itself, because the view from the bridge is a bit blocked by the canyon walls.

If you are feeling rather tired at this point, turning around at the Third Bridge would be perfectly fine, though you can proceed upward. I am often a completest when it comes to my hikes, so I forged on ahead. The trail ascends sharp and steep from the Third Bridge to the Second Bridge. My body was definitely feeling the elevation gain and needed to make use of the benches by the Second Bridge. At this point, I was at the top of the canyon, but because the elevation gain is so great, I was looking WAY down into the canyon and not more intimately closer to the river. At that vantage point, I could see the river way down below, but only in glimpses, because the canyon rock is much drier and curvier. It’s a pretty view of the mysterious ways water can twist and shape rock, but it’s not as beautiful as the waterfalls and the rushing river, and a bit of a letdown after coming from the crashing waterfall at the Third Bridge.

After resting, I descended the trail and returned to the Sixth Bridge trailhead, pausing again to take in the gorgeous views from Third to Fifth Bridges (the best parts of the trail in terms of beautiful nature). The trail is fairly easy overall, though there are some moderate stretches of elevation gain, and the trail can be wet and muddy in parts. But if you love beautiful canyons, river rapids and an abundance of waterfalls, this is a great trail to start your day.