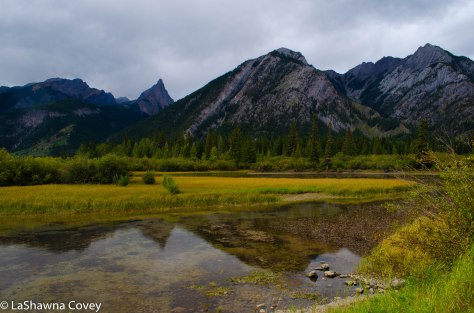 One of the best things to do in Banff, and the cheapest and healthiest thing, is hiking. There are so many hikes in the area that range from short and fairly easy to long and strenuous. When planning my trip, I decided to maximize the easy hikes and make judicious choices when it came to the moderate hikes, since I knew I only had so much energy in my body.

I chose to start my hiking vacation extravaganza with the Sundance Canyon hike, which was deemed easy in my guide book (though moderate at the trail head, but often times those recommendations are a bit more cautious and geared toward the very casual hiker). The description of the Sundance Canyon hike sounded very pleasant, since about half of it is on a flat or gently uphill paved path, some of it along a nice river with mountains in the background. I thought it would be a good way to get my body ready for more difficult hikes down the road, and get my first taste of Banff scenery. 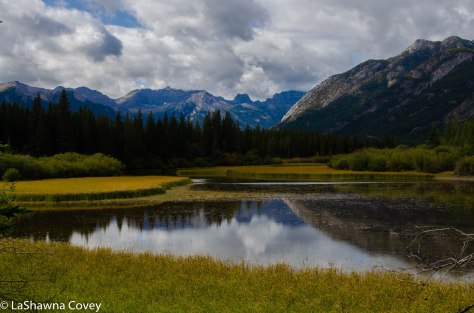 I started the hike in the mid afternoon, figuring I would take a couple hours to do the hike, which is a loop hike up to and past a waterfall, through a forest, and down through the forest, back to the paved path. I had some concerns for my own fitness and stamina when I started off on the flat, paved path and was struggling a bit. I had been exercising in advance of this vacation to prepare, and wasn’t expecting to struggle at the outset on an easy hike. Though I didn’t realize it then (though I should have), I think this was just my body’s way of adjusting to the change in altitude. Even though I knew Banff National Park was in the Canadian Rockies, it never really occurred to me to look at the starting elevations for these hikes, even though I took careful note of elevation gain on the hike.

Banff National Park sits around 5,000 feet elevation, which is not enough to feel just walking around, but is enough to feel when doing some vigorous exercise, like fast walking. So part of me was thinking my poor performance was JUST a fitness thing, and not partially an altitude acclimation thing, but I continued the hike. 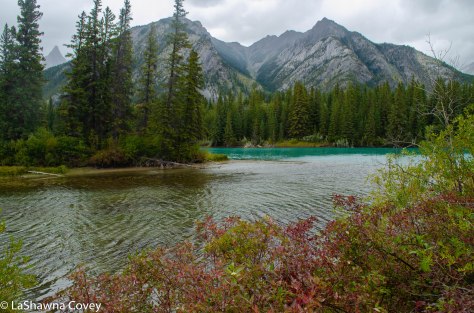 The initial walk along the river was really nice, and there were often benches along the river to allow you to take a rest and take in the wonderful view of mountains reflected in the river directly in front of you. Once past the river, the path remains paved, but starts a gentle incline uphill. You know you are about the start the more hiking portion of the hike once the paved path ends and the dirt path takes over. 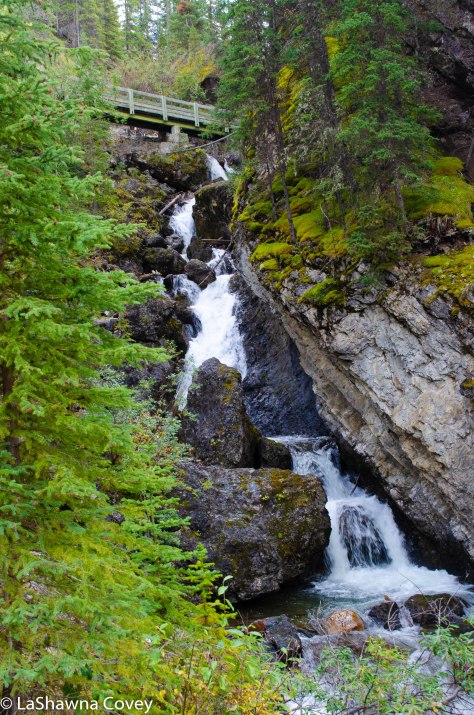 You cross a small river almost immediately and the path starts to ascend up the river until you come to a wooden bridge going over the waterfall. This is the highlight of the hike in terms of beautiful nature. If you were pressed for time, it would make plenty of sense to stop here, get your fill of the waterfall itself and the view of the canyon from the bridge, and then turn around and go back from where you came. I was honestly surprised at how quick it was to get from the start of the dirt path to the top of the waterfall. I was expecting something more strenuous, but the short, steep hike up to the bridge is the most steep uphill of the hike. 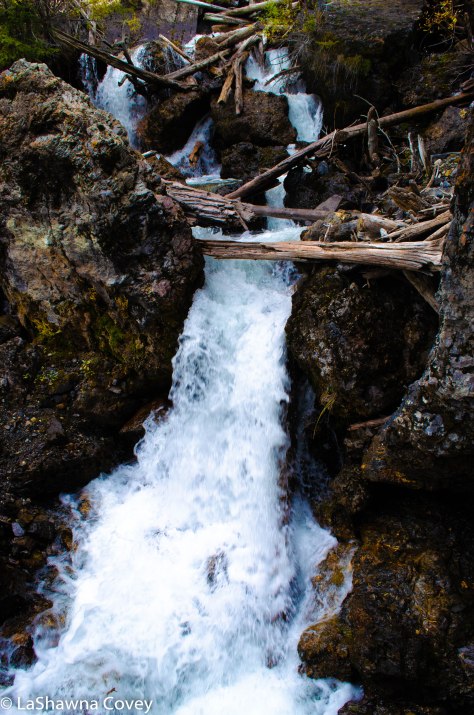 I decided to do the rest of the hike, even though I had heard it wasn’t as scenic as the waterfall. The path initially parallels the river as you go deeper into the canyon, but eventually the path takes you upward and through a forest. It’s at this point the path starts wending its way back, but through forest. I knew at some point, the midpoint (such as it is) was going to be a viewpoint of the surrounding valley through the trees. This view isn’t marked with any sort of sign, but you know it when you see it. It’s at the point where the trees open up, and there is a wooden fence that lines the hilltop, so you don’t go too far and slide down the hill. 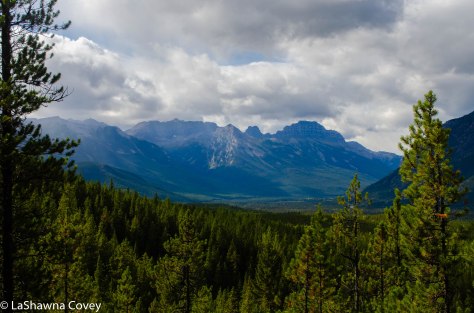 Once you reach the viewpoint, the path continues and winds its way steeply downhill through a series of switchbacks, until you find yourself back at the trail head for the dirt trail and then just take the pavement path back to your car. This is a fairly easy hike, and I think it is a good one to start with. The views are nice, but not astounding, so I think I would have been a bit disappointed if I had done one of the hikes with amazing views, and then did this one, which has comparatively fewer awe-inspiring vistas. I thought it was a good choice to start small and then work my way out to the longer hikes and better views. 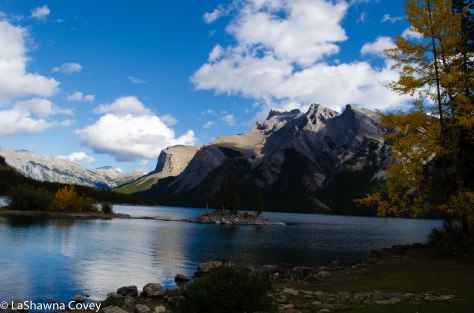 The Sundance Canyon hike started my hiking vacation, and the Stewart Canyon hike effectively ended it, at least from a hiking perspective. So these two, relatively easy hikes served as bookends for my vacation. I did the Stewart Canyon later in the afternoon, though due to a variety of reasons (mainly because I wanted to visit someplace else for sunset), I only did a part of this hike. But it was enough to see this is as a pleasant hike, though not overwhelmingly beautiful. Like Sundance Canyon, this is a good introductory hike to the area, because it is pretty easy, and doesn’t have the jaw dropping views that you will see later. So doing this hike at the end was not going to fill me with the same wonder as if I had done it at the start of my vacation. However, I chose to put this
hike at the end of my vacation, because at the start of my vacation, the area was still under bear restrictions. Meaning, that the trail was open, but if you went beyond the bridge over the river and followed the path up the canyon, you had to be in groups of four or more, because hungry bears were more likely to be prevalent in the area. The bear restriction was going to lift before the end of my vacation, so that is why I did it on my return to Banff.

The hike starts at the shores of Minnewanka Lake, which is one of the largest lakes in the Banff area, and you can take a boat tour of the lake if you so desire. By the time I had returned to Banff at the end of my vacation, it was like fall foliage was in full bloom, and the tree leaves had turned a golden yellow. 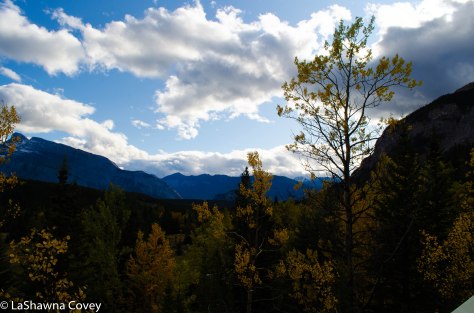 The hike initially takes you along the lake shore and past some picnic tables and fields into a rocky, rooty path. It’s not as rocky as I have experienced, but you do have to watch your step at times (and be on the lookout for mountain bikers, because they like this path as well). The trail takes you along the lake, and then around and up the Cascade River that feeds the lake from Stewart Canyon. It is impossible to get lost on the trail, and you know have hit the end of the free portion of the hike once you hit the bridge that crosses the river. There are plenty of signs that point out the bear restriction if you go further, even though that restriction had been lifted by this point. 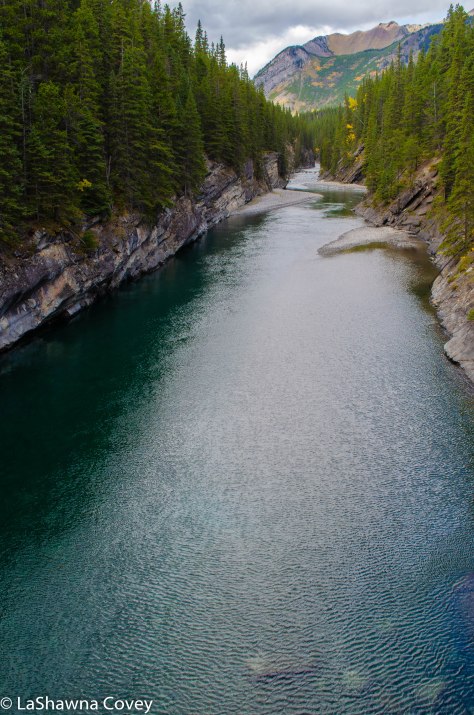 After walking a bit along the canyon trail, I got the sense that while the canyon trail is pretty, I wasn’t liable to see anything that I haven’t seen before, since I had done numerous canyon hikes by this point. So I made the decision to return even though I only did about half of the hike. The hike itself is pretty easy, but keep in mind the dates for bear season, and plan accordingly if you intend to be in the area during bear season.