As I’ve written in many other blog posts, there is so much beautiful nature in Iceland. It’s like an embarrassment of riches if you love nature, and the sheer diversity packed on that small island, means you get major bang for your buck during a visit to Iceland.

I’ve talked about other major waterfalls previously, such as Dynjandi and Dettifoss, but there are so, so many other waterfalls. Many of them are super famous for visitors in the first place, and many of them are easily accessible, just off a major road (so they are catnip for tour groups). Of course there are some other beautiful waterfalls I wanted to see, but either didn’t have the time to hike to them, or the type of car I needed to get to them. But there are enough diversity of waterfalls and ease of access, that you can satiate any thirst for waterfalls. I know I got my fill while I was there, and I can never visit too many waterfalls. 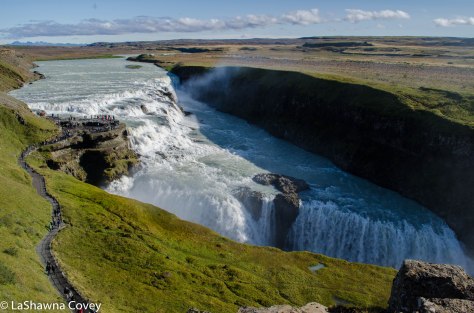 On our very first day in Iceland, literally just a few hours off an overnight flight to Iceland, we were standing at the edge of probably one of the most famous waterfalls in Iceland, which is Gulfoss. It’s not necessarily the best waterfall in Iceland (though I don’t know how you would determine which waterfall is “best”), and it’s not the biggest, but it is the most famous. Gulfoss is one stop on the super popular “Golden Circle” day tour of different sites around West Iceland (the other stops being Geysir, Pingvellir and usually a geothermal power plant). I daresay that the vast, vast majority of tourists to Iceland will see Gulfoss, either on an organized tour bus group or on an independent tour.

Most visitors probably don’t venture very far outside of the Reykjavik daytripper radius, so it is easy for tourists to take bus tours to see sites outside of Reykjavik, but not that far outside of Reykjavik. On my first trip to Iceland, I did the Golden Circle day trip, because it was just easier, and I hadn’t decided to rent a car to travel around Iceland at that point.

But planning this tour, I knew we would rent a car for a couple weeks, and would avoid Reykjavik altogether, simply to maximize time in the outer sites. But even though both my mother and I had been to Gulfoss, I wanted to see it again. Since both of our visits to Iceland were in the winter, we wanted to see the waterfall in warmer weather. A winter visit was really nice, because the surrounding area was covered in snow and ice, but the ice also meant that the trail to get closer to the waterfall was closed, but this time, we would be able to get up close and personal with the waterfall.

If you want to do your own self drive Golden Circle, it is super easy to do, since all the sites are located within a reasonable drive of each other, and all sites are well marked. That is one of the many nice things about driving in Iceland. Once you get outside of the Reykjavik metro area, there are usually only a few roads, and everything is well marked, so it is so easy to drive and not get lost.

Since Gulfoss is super popular, you are guaranteed plenty of crowds when you visit (unless you visit really early or really late in the day). The waterfall is an odd and interesting setup, which only adds to the beauty of the site before you. You can view the waterfall from an overlook to get a wide expanse view of the falls and the canyon. The falls aren’t just one single falls, but rather multiple level falls. You can also hike down some stairs and a path down to stand right on the edge of some of the falls. The amount of water pouring through the canyon throws up a lot of mist that can obscure the canyon view, only to be exposed when the wind picks up.

Another beautiful falls that is easily accessible is Godafoss, which is a nice, horseshoe-shaped falls that is located just off the Ring Road east of Akureyri on the way to Myvatn. This falls can be seen from the road, and there are two viewpoints on either side of the falls. Both sides provides a bit different view of the falls and the river, so it is worth it to stop at both viewpoints if you have the time. You can either drive the short distance between each waterfall side, or walk the easy path and bridge over the river.

Both viewpoints require a tiny bit of scrambling over rocks, but it’s not that difficult if you are careful. Like all of the waterfalls in Iceland, there aren’t any guardrails. So it is incumbent upon visitors to be careful and not do stupid stuff that might result in them falling off high cliffs. 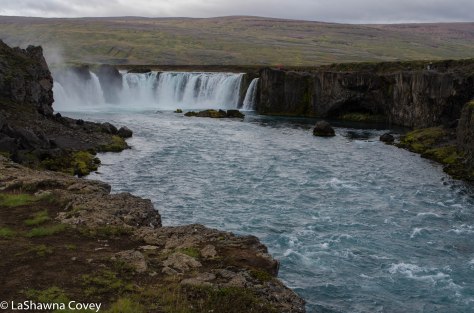 The view of Godafoss from up close and personal and from farther down the river are really nice, and provide many picture worthy settings. Godafoss is also worth your time. You are liable to see some tour buses at this site, but since you see far fewer tour buses outside of Reykjavik, it doesn’t overwhelm visitors trying to push their way through crowds for a good view.

The next set of waterfalls I want to talk about don’t have any individual names (that I know of), but if you have time, they are absolutely worth your time. And I don’t think this site is really popular, so you have to know about it in advance (though it is known enough, that you won’t be on your own when you visit).

If you happen to be in South Iceland (and chances are, you will spend some time in South Iceland, either on your own or as a tour group), I would recommend making the time to visit Fjardargljufur, which is a picturesque, twisty, somewhat narrow canyon that houses some nice waterfalls. 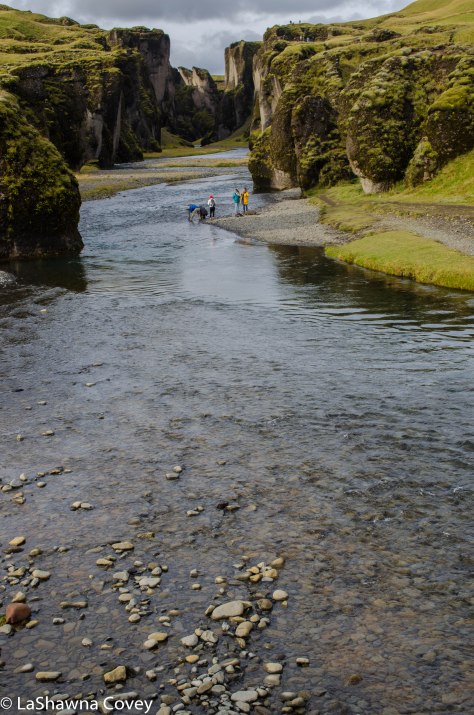 Reaching the car park for the canyon is rather easy. It is on Route 206, off the Ring Road, east of the town of Kirkjubaejarklaustur. Like all routes in Iceland, it is well marked  with a sign. The road to the car park is about 3.5 kilometers down a rutted, bumpy road. But by this point in our Iceland vacation, I was wearily used to bumpy gravel roads, so I just slowed down and knew I would get there. 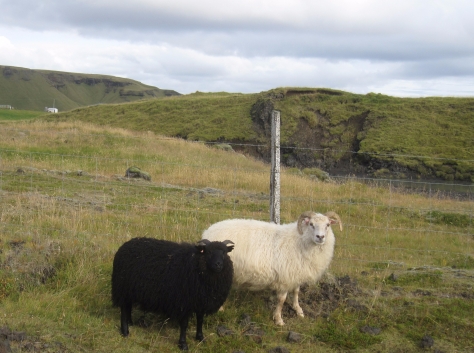 On the road, we finally got to see one of the things we had been hoping to see up close in Iceland, and that was a black sheep. Even though most of the sheep in Iceland are white, there are occasional sights of black sheep and mixed black and white sheep, but most of them were always off in the distance. The few times we had tried to approach a group with black sheep, they always ran away, because they seem so shy. But finally, we saw a white and black sheep just hanging out together just off by the side of the road. Here was our chance to photograph a black sheep. I was hoping to get a good photo, but by the time I got out of the car and got my camera out, they were running away like little sheep teases. However, my mother just had to roll down the car window and was able to snap a nice picture of the cute little sheep couple.

We knew we were at the car park, because we saw the long line of cars down the side of the road. Amazingly since this is not a hugely popular site, there is a nice bathroom right at the trailhead. The canyon is only about two kilometers out, the walk is very nice. The path is very well maintained, though there are some hills  since it follows the topography of the surrounding canyon.

The trail is along the top of the canyon, and there are numerous viewpoints along the way that provide beautiful looks down into the canyon. The canyon walls were covered in moss, with a nice river flowing through it. My favorite views were the couple waterfalls, that were nice shapes and provided a different view of the canyon.

Again, I highly recommend a stop at Fjardargljufur if you have the time. The walk is short and pretty easy, and a good excuse to get out of the car and stretch your legs. The canyon is a bit different than other places we visited in Iceland, and is almost like a glimpse into Middle Earth. 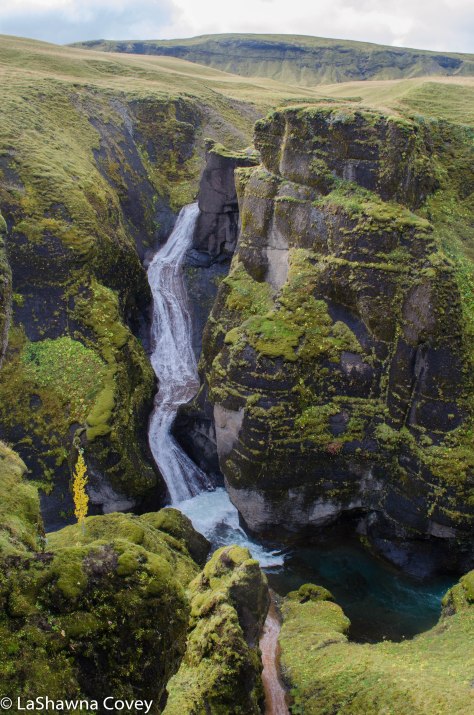 The last two waterfalls I will mention are two rather popular waterfalls, and extremely accessible, as in they are both viewable from the Ring Road. And since both of these waterfalls are found  in Southwest Iceland, well within the Reykjavik tourist radius, you can count on seeing hordes of tour buses and rental cars. Which is fine. Just know before you go. 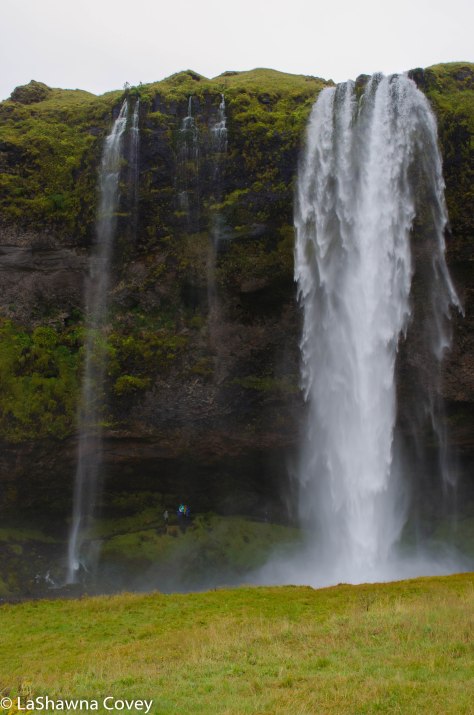 Seljalandsfoss is a long, thin waterfall located not far from Porsmork, so it is often a quick stop for Porsmork day tours. In fact, that is where we picked up our tour group, since we were coming from South Iceland. This waterfall must be popular enough to justify paid parking. It is only the second place I have seen paid parking (Skaftafell National Park being the other). 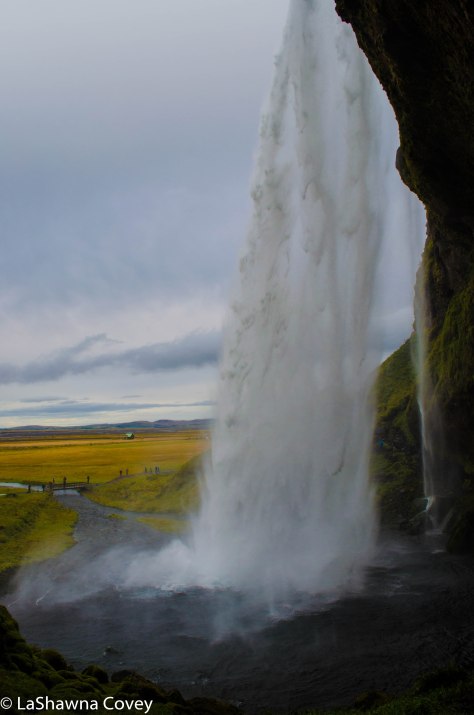 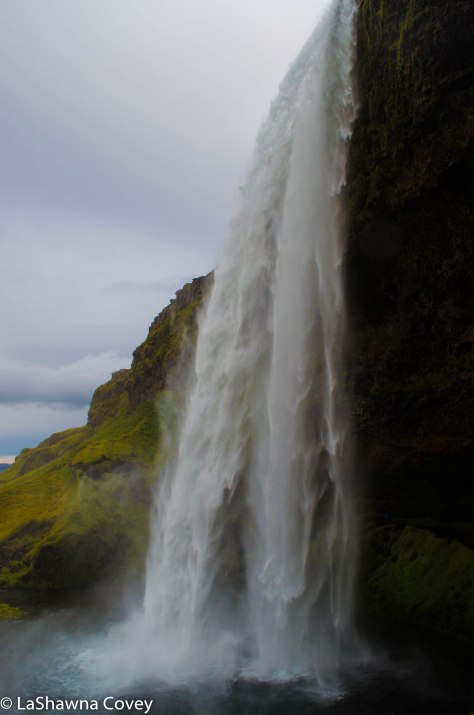 The last waterfall, Skogafoss is just down the road from Seljalandsfoss. This waterfall is a different look, because it is a wider, more traditional looking waterfall. There is a big parking lot and an easy path to the bottom of the waterfall. You can walk right to the edge of the pool, though expect to be showered in waterfall spray. The day we visited the waterfall, the weather forecast was supposed to be a nice, sunny day (and it ended up being that way in the end), but for the brief time we were at the waterfall, the sky just opened up and dumped down on us.

The nice thing about the rain is that it cleared out most of the tourists, including my mother who high tailed it back to the car. But since I was there and outfitted in a good rain jacket, I was determined to get some pictures from the top viewpoint. You can get a nice view of the top of the waterfall and the surrounding countryside by ascending the very steep set of staircases. Skogafoss is 62 meters tall, so it is not an insignificant distance, and you really feel it ascending to the top. The stairs are really nice and easy to ascend, but the sheer steepness required me to stop a few times and catch my breath.  But keep at it, and you will get to the top eventually. 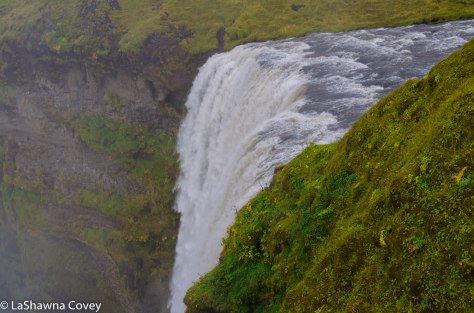 The view was good, even with the cloudy weather, since the rain had stopped by this point and the sky was brightening up. If you wanted, you could continue hiking from the top of Skogafoss to Porsmork, which is about a 23.5 kilometer trail. I elected not to do that, but the option is there if you so desire.

Like I said before, Iceland is an amazing wonderland of all sorts of nature, and if you love waterfalls in general, you will be in ecstasy while visiting this country. I wish I had been able to see a couple more waterfalls, but what I did was more than enough to keep me satisfied for a while.

2 thoughts on “The Wonderful Waterfalls of Iceland”